Welcome to Newsletter Xtra, where wonderful rebel actions we couldn’t fit into the main Global Newsletter have their moment to shine. This month we bring you reports from Italy, Bangladesh, Cameroon, Argentina, South Korea, Poland, New Zealand and many, many more… 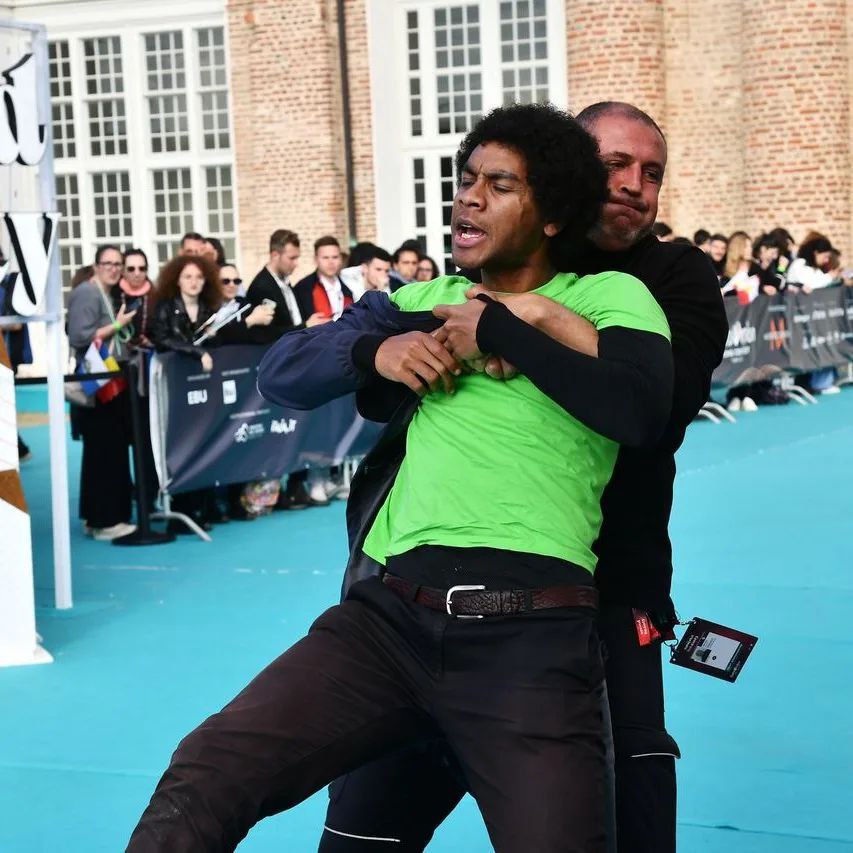 14 MAY | Turin, Italy: Three rebels were forcibly removed from the Eurovision Song Contest after trying to get the musicians to declare a climate emergency. The action was part of a week of EuroRebellion in the city as it hosted the major musical event. 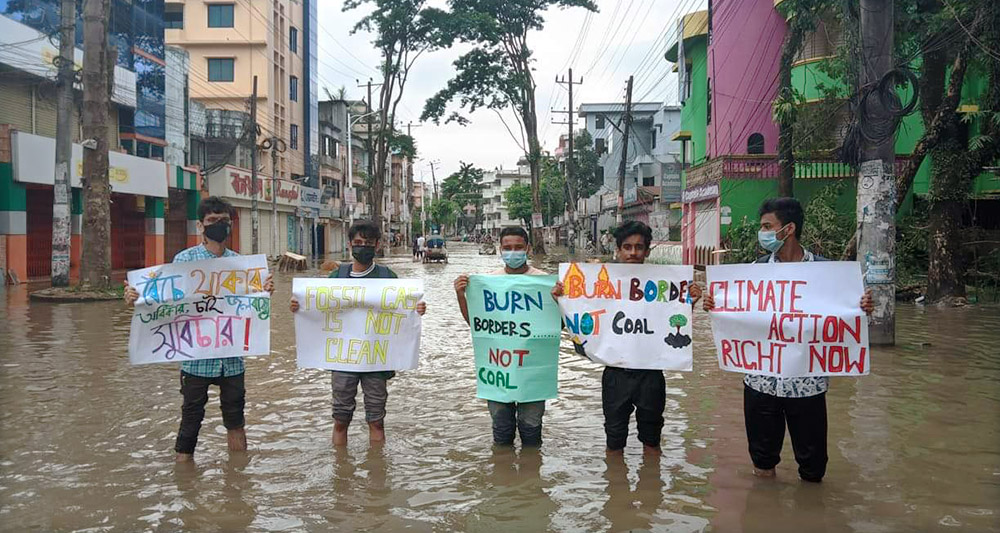 20 MAY | Dhaka, Bangladesh: With ten people killed and two million stranded due to rivers in the north-east bursting their banks, Fridays For Future climate activists demonstrated in the country’s capital. 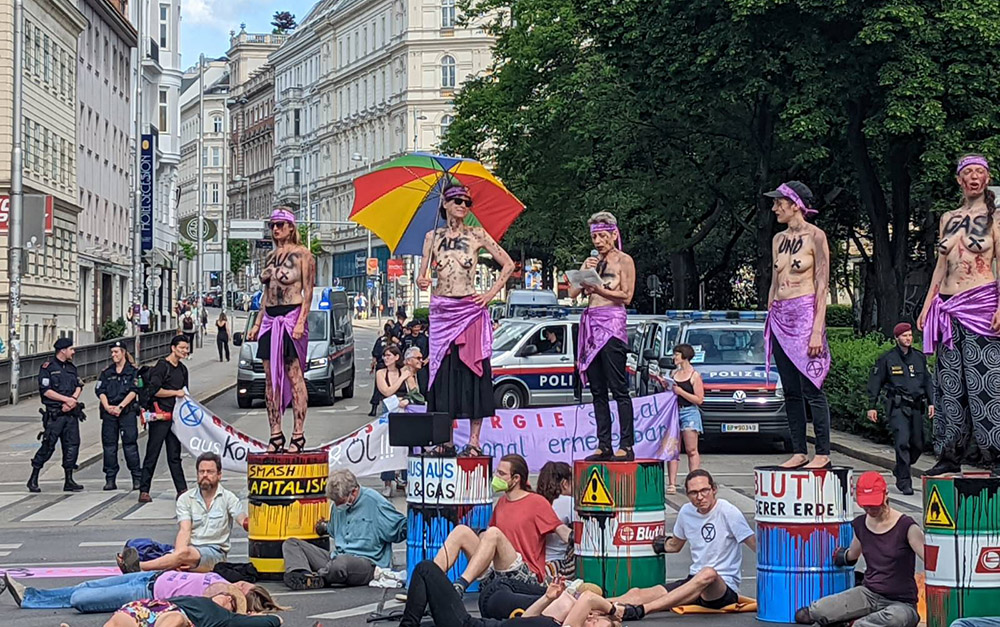 25 MAY | Vienna, Austria: Dozens of protestors reoccupied the construction site of the Lobau motorway on the outskirts of Vienna. Four days earlier, hundreds more paraded through the city centre, blockading streets.

25 MAY | Limbe, Cameroon: XR Cameroon celebrated Africa Liberation Week with the theme: "Push for Climate and Environmental Justice Towards the Africa We Want". They wrote: “We stress the need and rights of Africans to own and enjoy all their natural resources, land, air, water, forest, vegetation…”

25 MAY | Paris, France: More than 250 environmental activists including rebels and members of Friends of the Earth France blocked fossil fuel giant Total’s annual general meeting so successfully that the event was finally cancelled. Other activists targeted the banks and institutions that finance Total’s climate destruction. 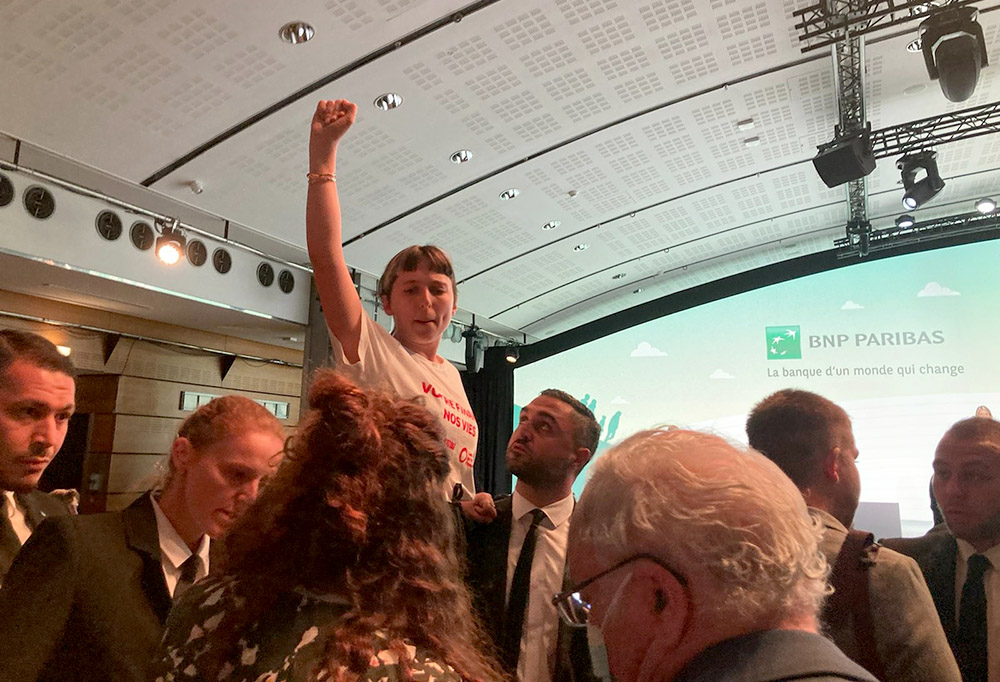 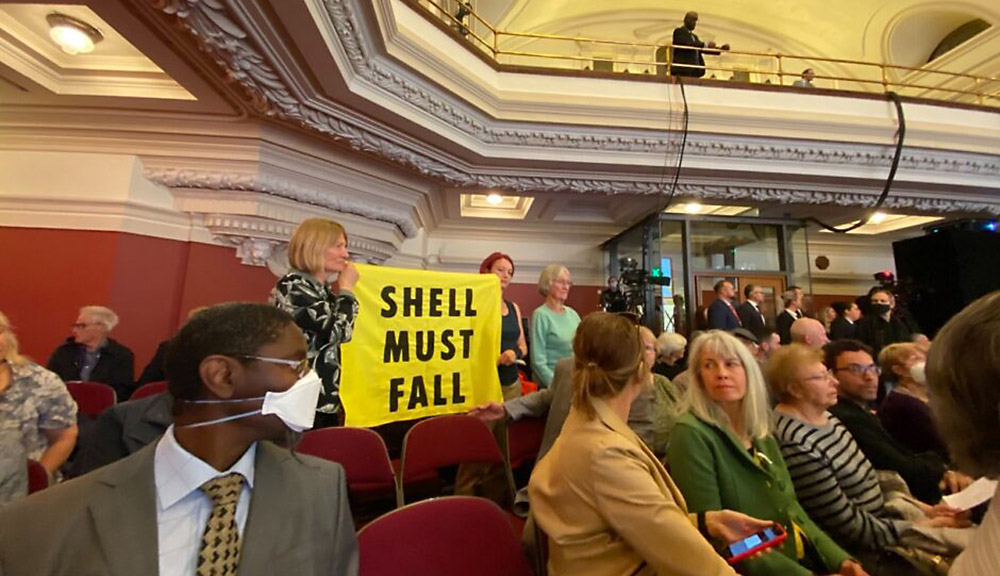 24 MAY | London, UK: More than 80 rebels and other activists disrupted Shell’s first annual general meeting in the UK. A flash mob upstaged the Shell Chairman’s address, singing “We will, we will stop you” to the tune of ‘We Will Rock You’. Others glued themselves to chairs and interrupted speeches, with protestors from Nigeria, the Netherlands and the UK reading out testimonies accusing Shell of human rights abuses, ecocide, fueling climate breakdown and funding misinformation.

The day before, Shell’s senior safety consultant dramatically quit over the firm’s “double talk”. She sent her resignation video to more than a thousand colleagues explaining why, and asked them to “please walk away while there’s still time”. 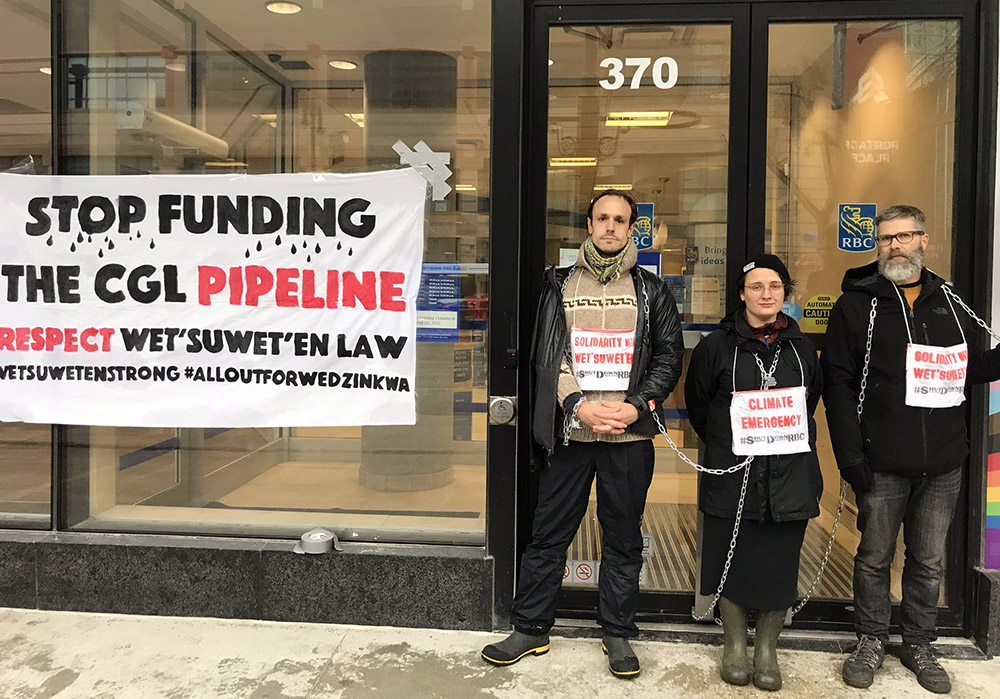 18 MAY | Winnipeg, Canada: Activists chained themselves outside the Royal Bank of Canada (RBC) to protest the Coastal GasLink pipeline being built through the indigenous Wet’suwet’en territory in British Columbia. RBC has put $262 billion into fossil fuel projects since 2015, including a $6.8 billion loan for the Coastal GasLink.

The Wet’suwet’en Nation has condemned escalating police harassment. The UN Committee on the Elimination of Racial Discrimination recently issued its third rebuke to Canada and British Columbia, calling for withdrawal of police and an end to the forced eviction of Wet’suwet’en people from their territory. 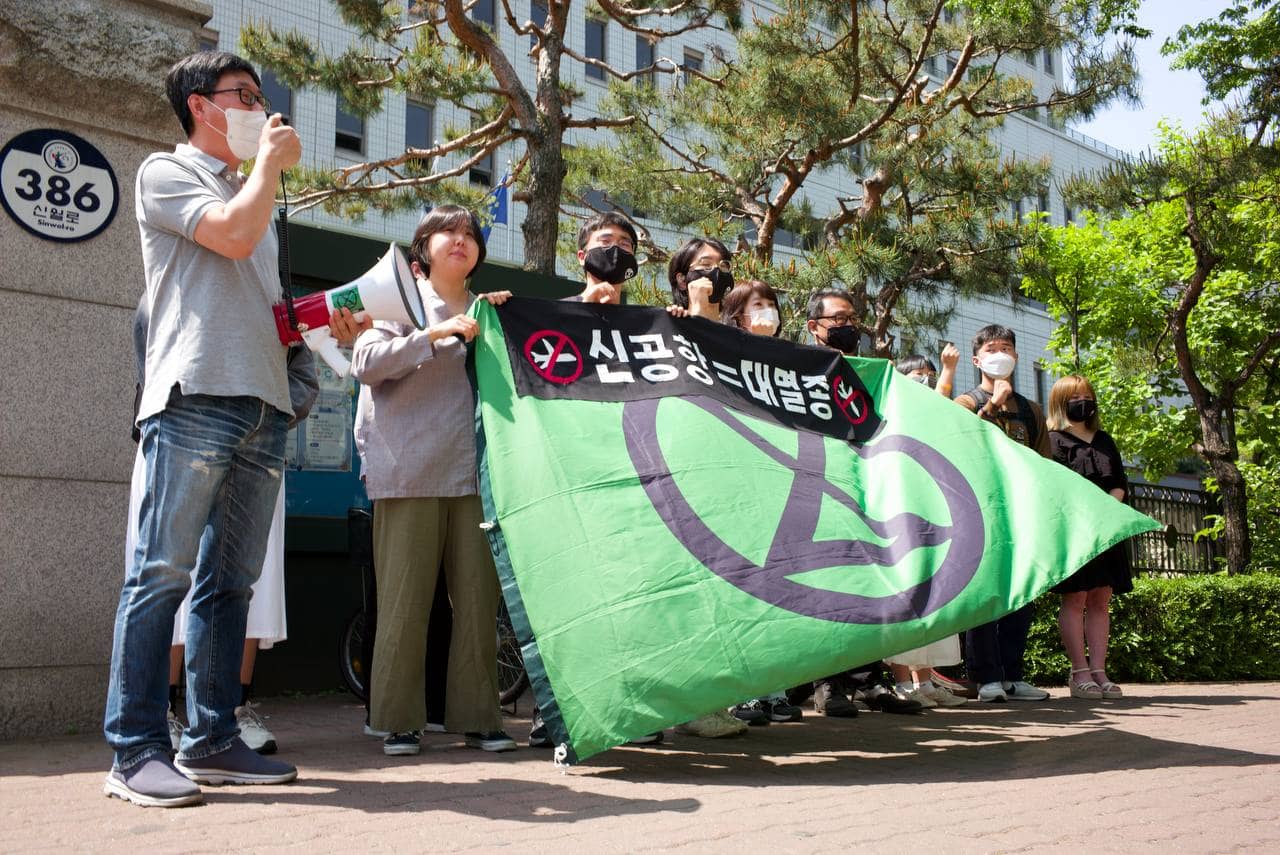 12 MAY | Seoul, South Korea: In March last year, six rebels occupied a political party HQ for its support of a new airport. Instead of paying the fines issued, the rebels decided to go to trial, XR Korea’s first. The second hearing is this month. 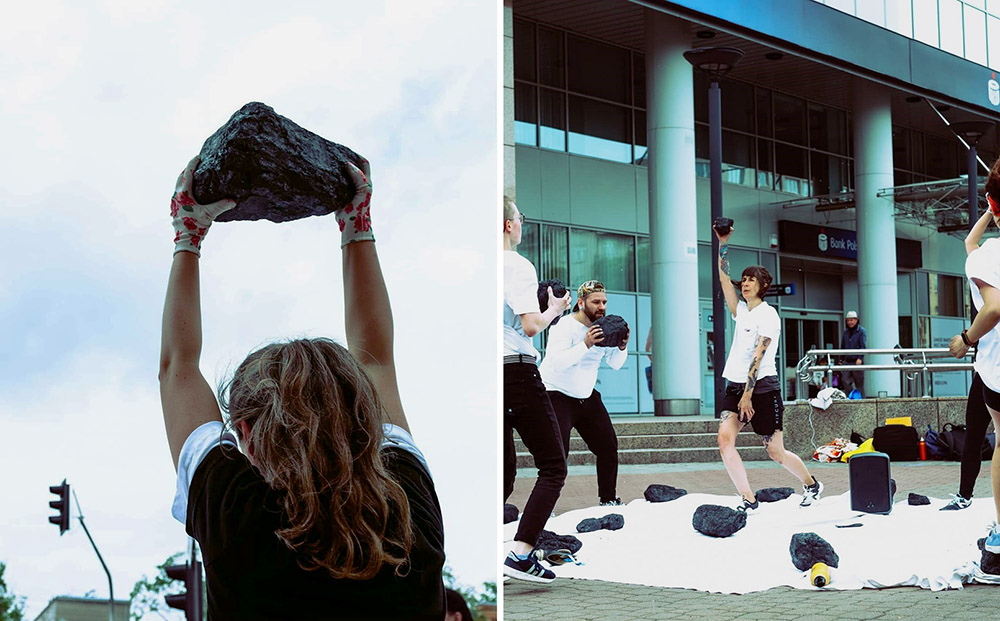 12 MAY | Warsaw, Poland: Rebels joined other activists to do some fossil-fitness training outside the AGM of Poland’s biggest bank (PKO BP). The hope was they could inspire the bank to get flexible and stop financing fossil fuels. 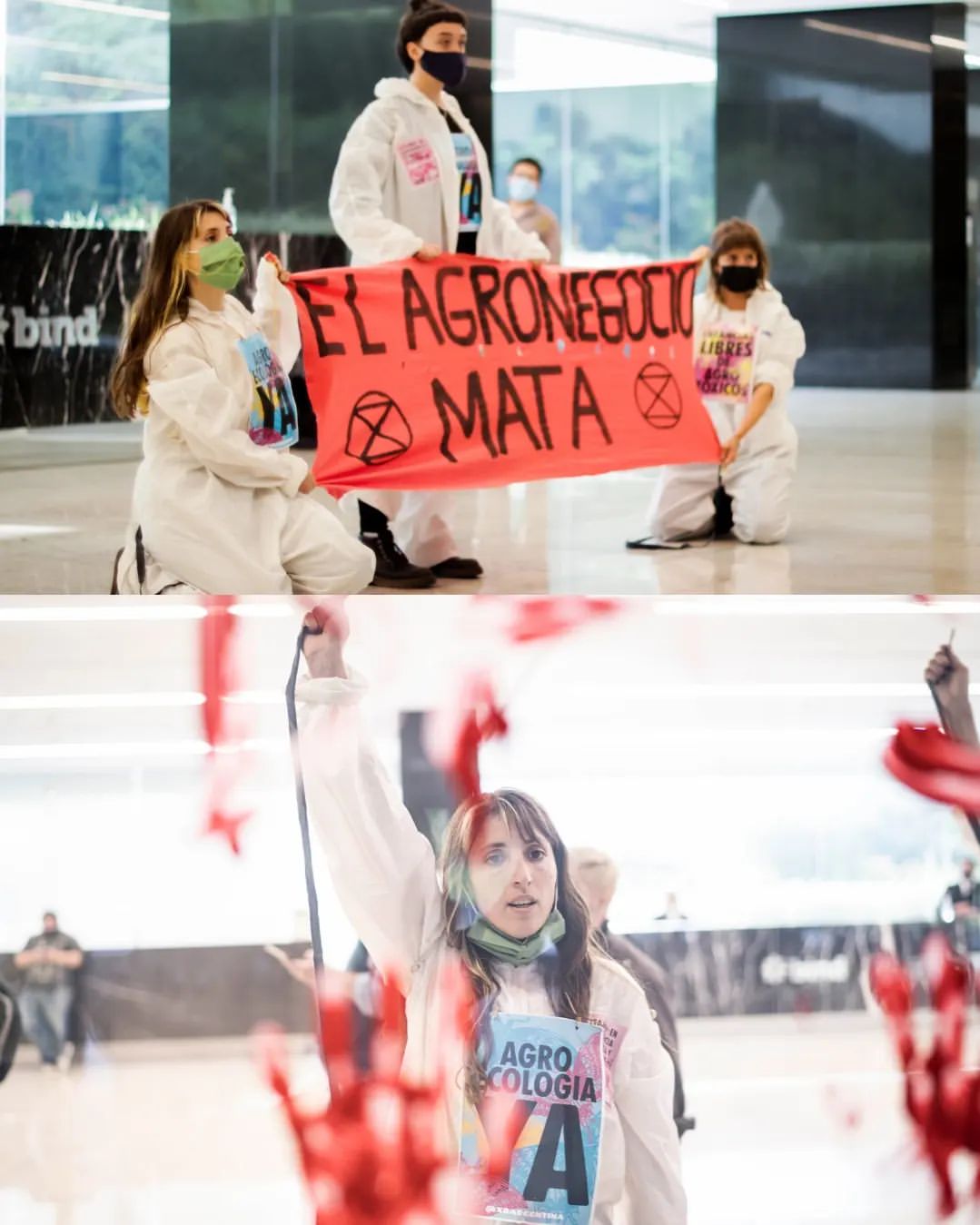 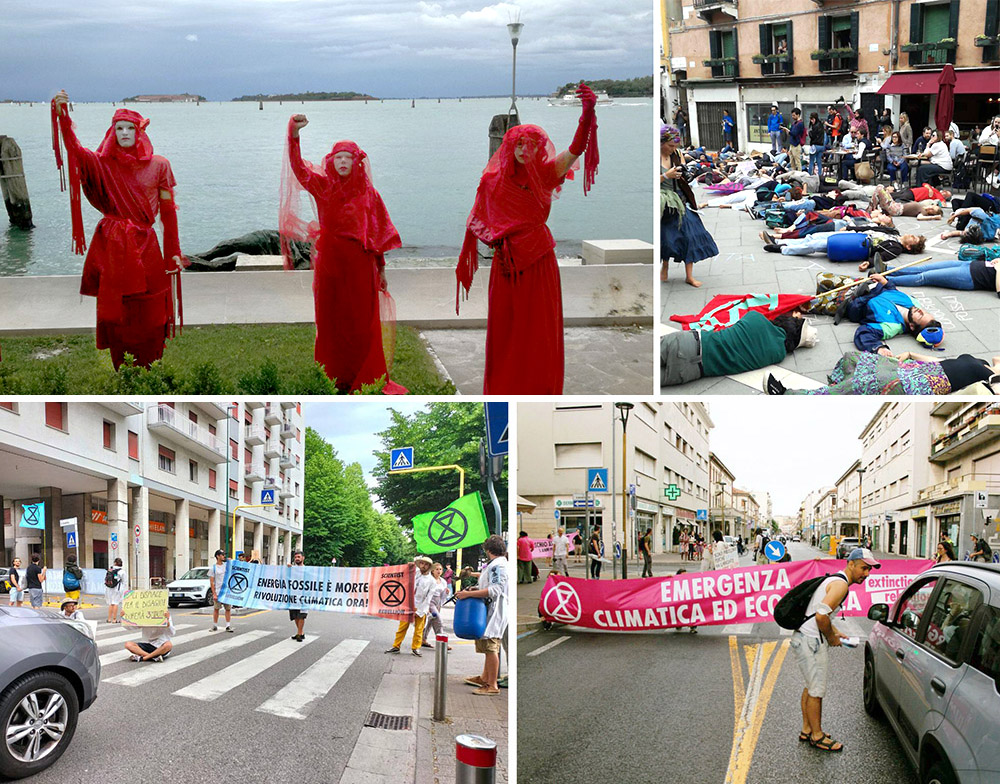 27 - 29 MAY | Venice, Italy: A three-day rebellion in and around the city of Venice was marked by red rebels protesting in front of the Venice lagoon, a die-in in one of the city’s squares, and road blockades in the town of Mestre on the mainland. 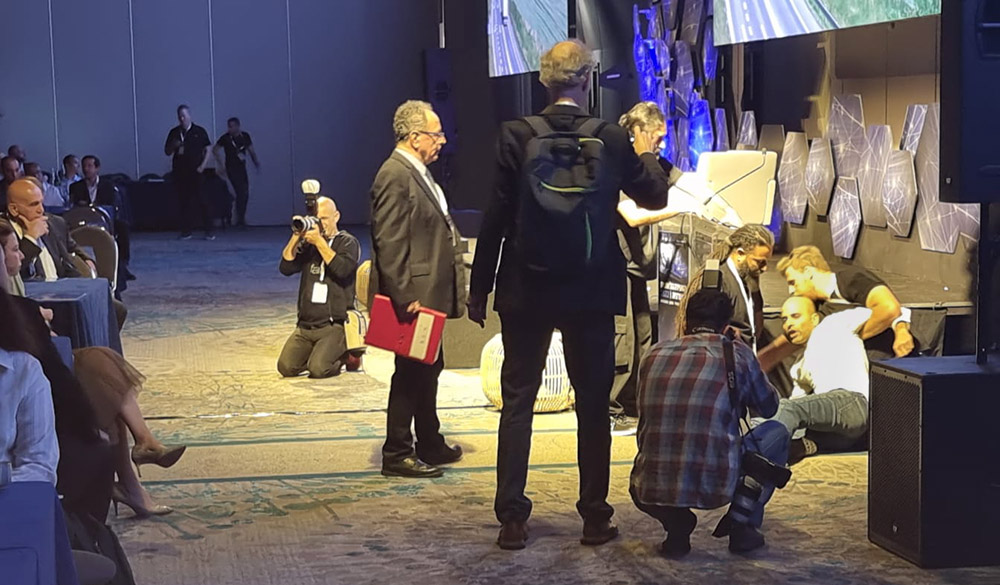 17 MAY | Tel Aviv, Israel: Rebels glued their hands to the podium to disrupt the National Energy Conference of the Israel Energy and Environment Institute. Outside, more rebels threw fake blood over the Hilton Hotel entrance and staged a die-in. Three were arrested. 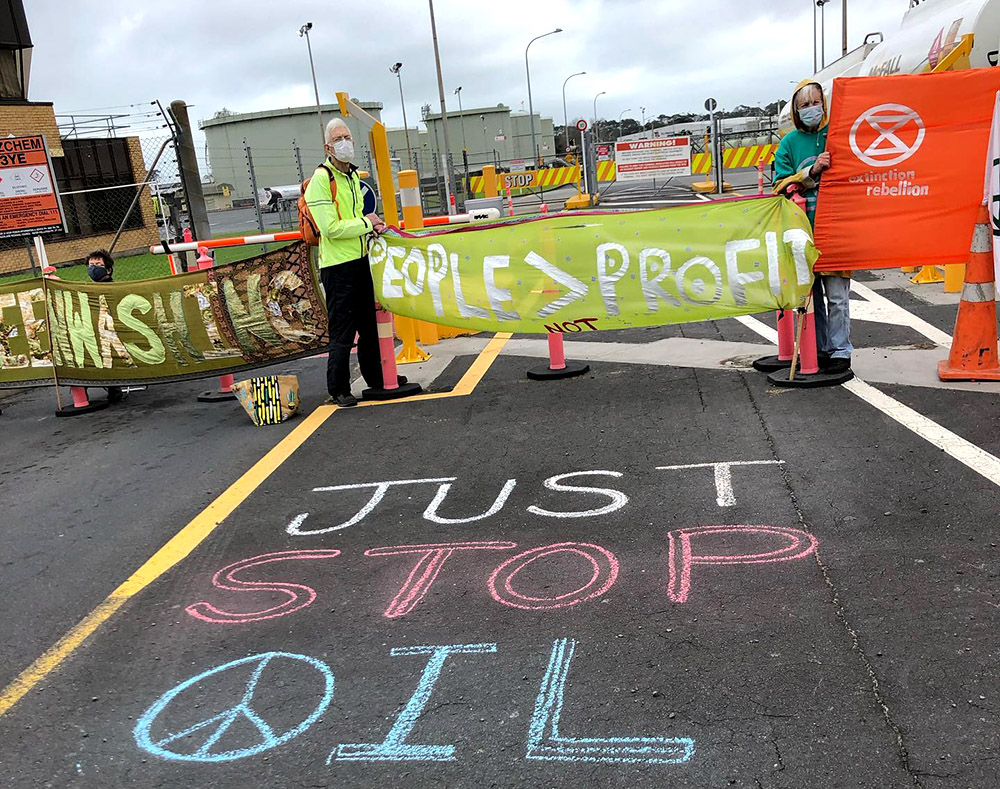 15 MAY | Auckland, New Zealand: Rebels blocked trucks coming in and out of the Wiri oil station on the outskirts of the New Zealand capital. 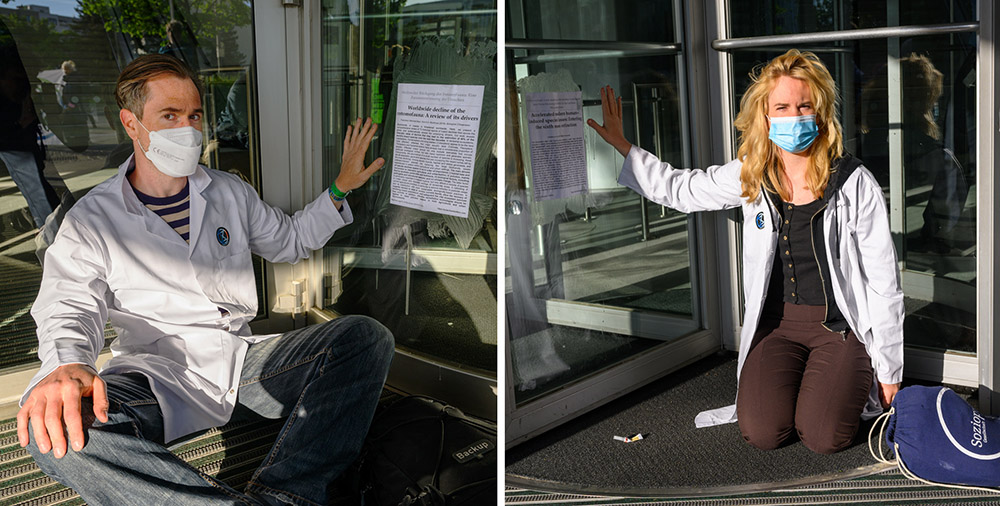 23 MAY | Berlin, Germany: Activists from Science Rebellion glued themselves to the office entrance of pharmaceutical giant Bayer, along with a scientific paper, Worldwide decline of the entomofauna, which states that over 40% of insect species are threatened with extinction. The action centred on Bayer’s use of the weedkiller glyphosate, which harms bees and other insects. 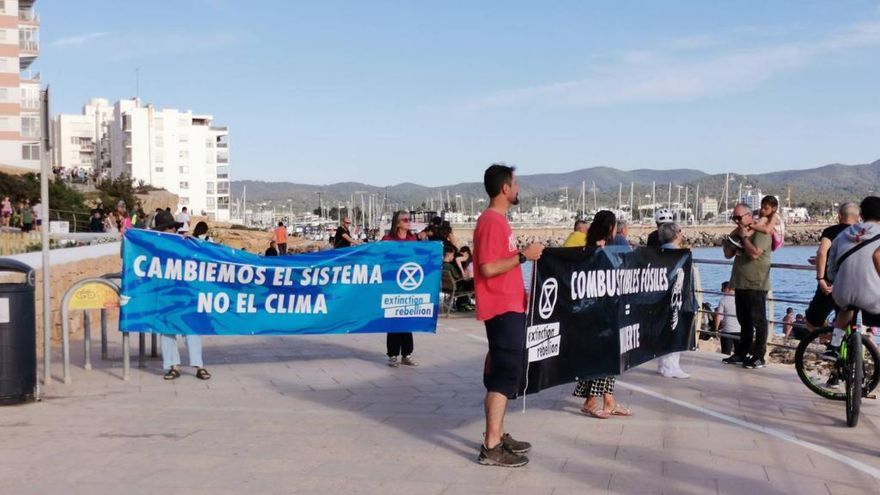 15 MAY Ibiza | Spain: Rebels protested at a Jet Ski Grand Prix, calling the noisy event unnecessary and illegal because it encroached on a Special Protection Area for Birds. The action triggered both applause and anger from the public. 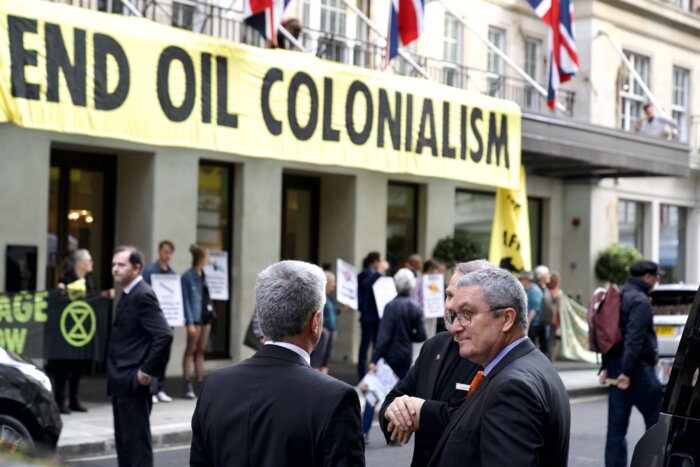 17 MAY London | UK: Rebels joined a coalition of activists to infiltrate and disrupt the Africa Energies Summit, an event for investors and extractors of the continent’s fossil fuels, as well as its politicians. Watch how rebels arrived at the summit here. 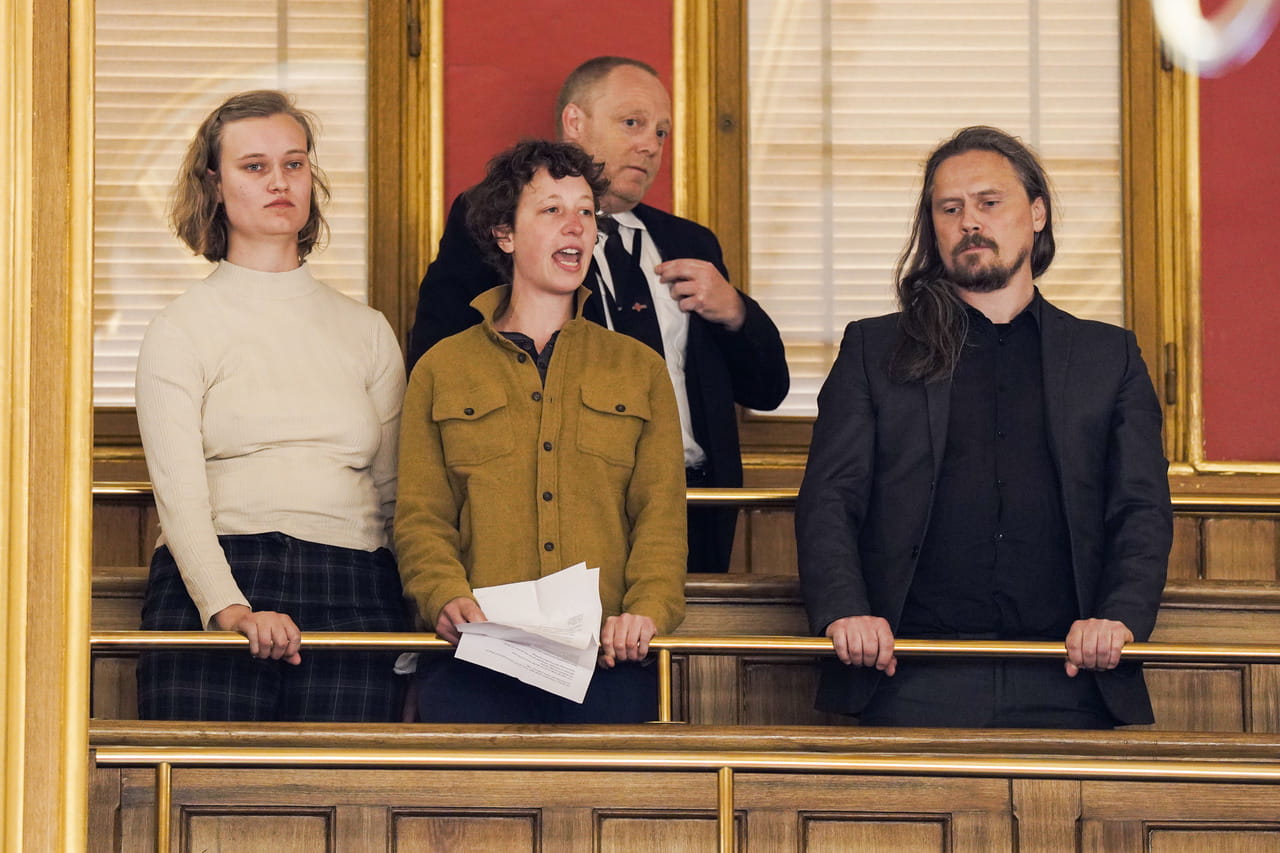 18 MAY | Oslo, Norway: XR Youth Norway organised an infiltration of Parliament. Rebels glued themselves to the gallery and urged the politicians below to use what little time they had left to act on the Climate Emergency. Photo: Heiko Junge/NTB. 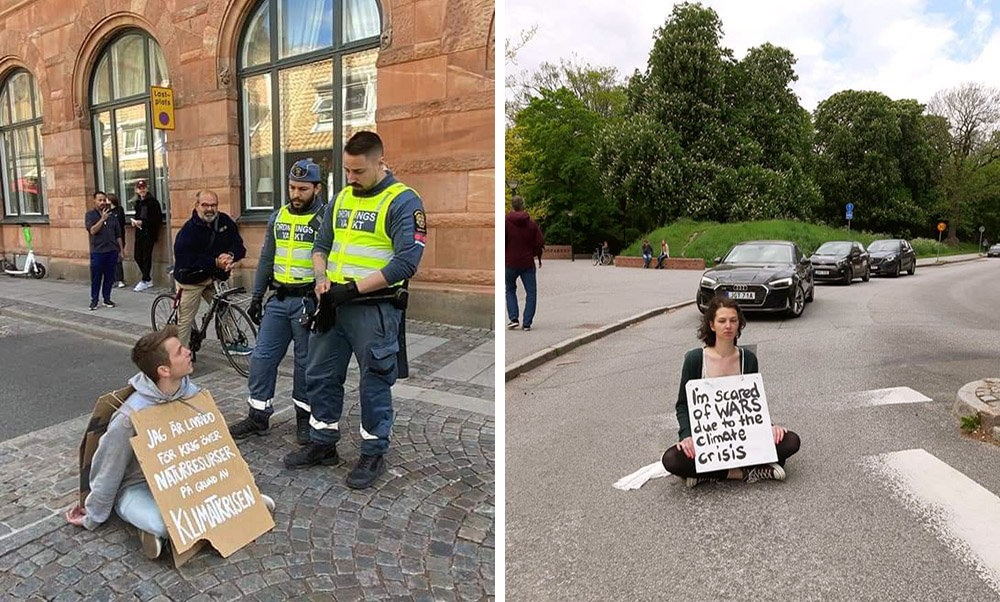 26 MAY | Lund, Sweden: Several Rebellions of One took place in the streets of the southern Swedish town of Lund. One of the rebels said of her action: “The climate crisis is a justice crisis, and I am terrified. The disruption I am causing is nothing compared to the climate crisis.” 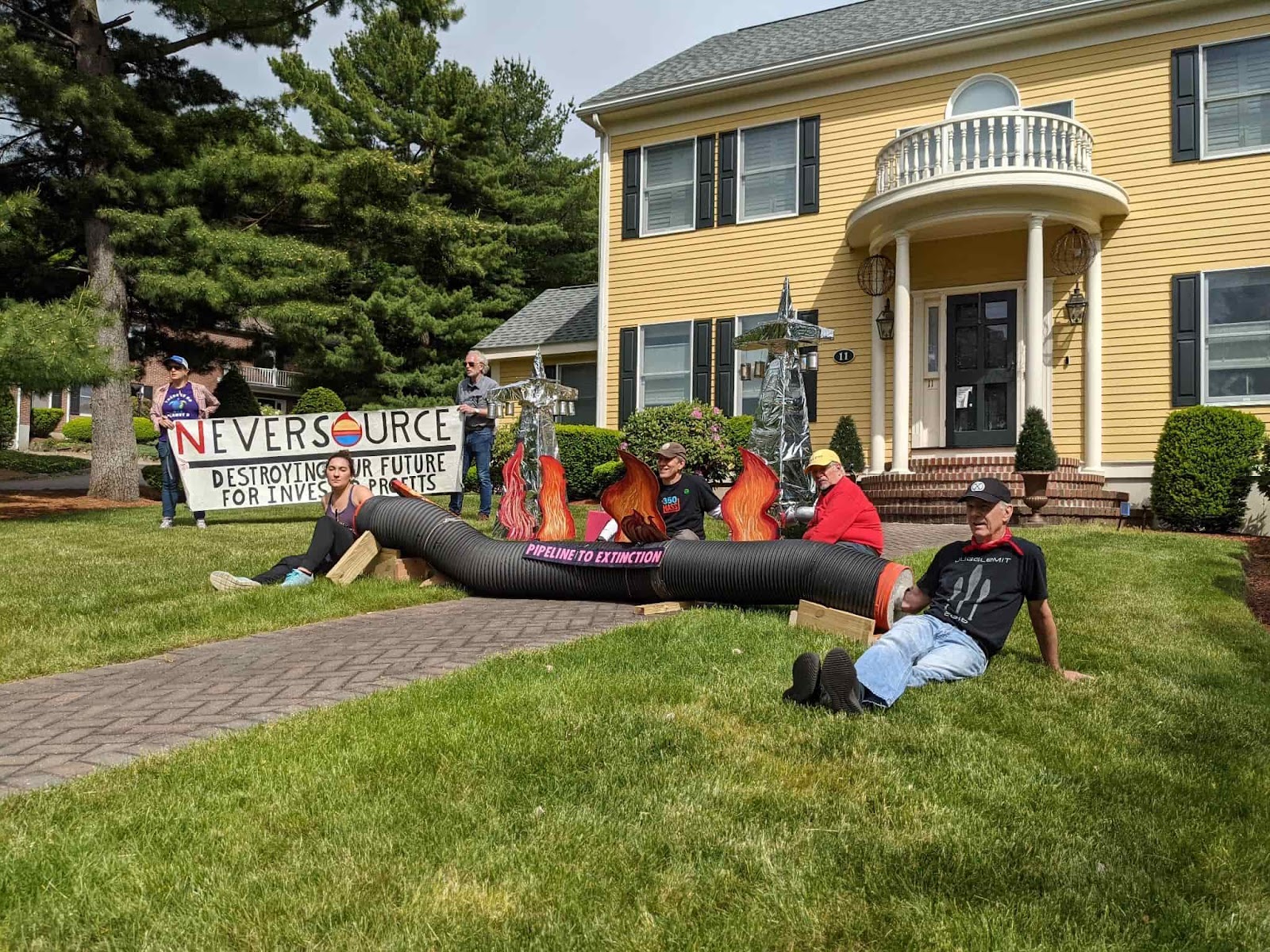 27 MAY | Boston, USA: Rebels occupied the front lawn of the CEO of Eversource, a gas and electric company in Massachusetts. Police declined to arrest anyone. Watch a video of XR Boston’s earlier Freedom from Fossil Fuel tour, where rebels marched from the offices of one climate criminal to another. 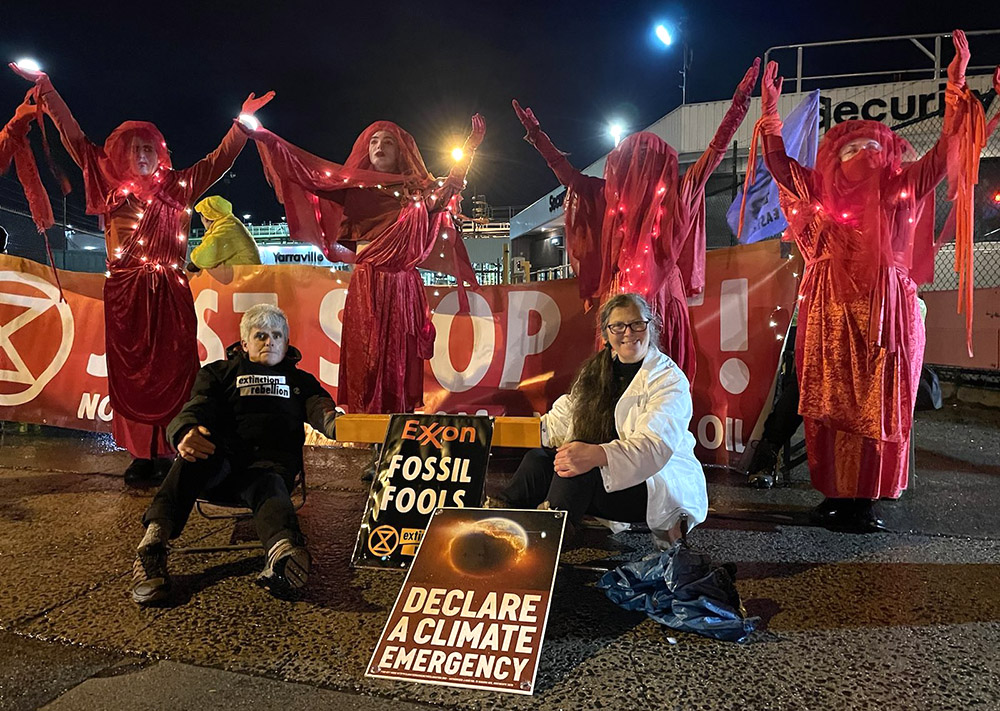 31 MAY | Melbourne, Australia: Rebels shut down the city’s ExxonMobil depot. The change of government in Australia, they say, doesn’t mean the climate emergency has gone away. Their message to the fossil fuel companies and new government: JUST STOP IT! NO MORE COAL, GAS OR OIL!