A Swedish activist protests outside the offices of Lundin Energy in Stockholm.

Welcome to Newsletter Xtra where wonderful rebel actions we couldn’t fit into the main Global Newsletter have their say. This month we bring you reports from Ukraine, Brazil, Uganda, Canada, USA, Israel, Czech Republic, Germany, Norway, Australia, France, Hungary, the UK and more… 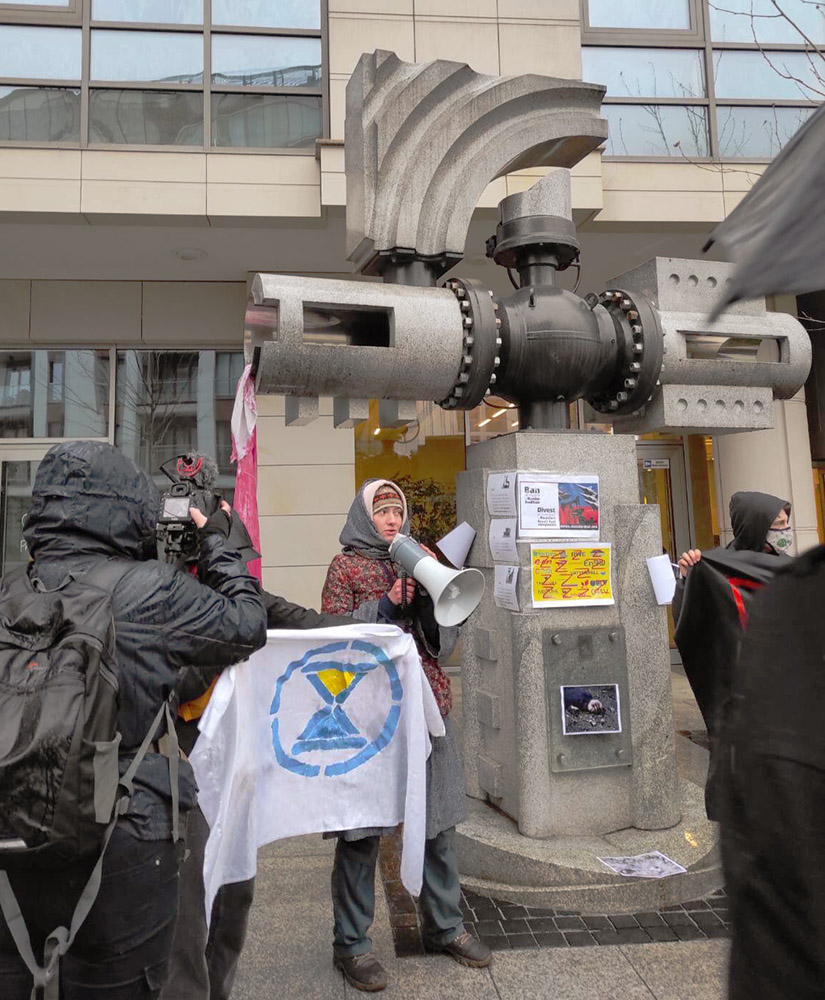 5 April | Western Ukraine Members of Extinction Rebellion Ukraine take action at offices of EuroGazPol, an affiliate of Russian energy giant Gazprom, near the Yamal-Europe pipeline monument. They were calling for countries to stop financing Russia’s war by buying Russian gas and oil. 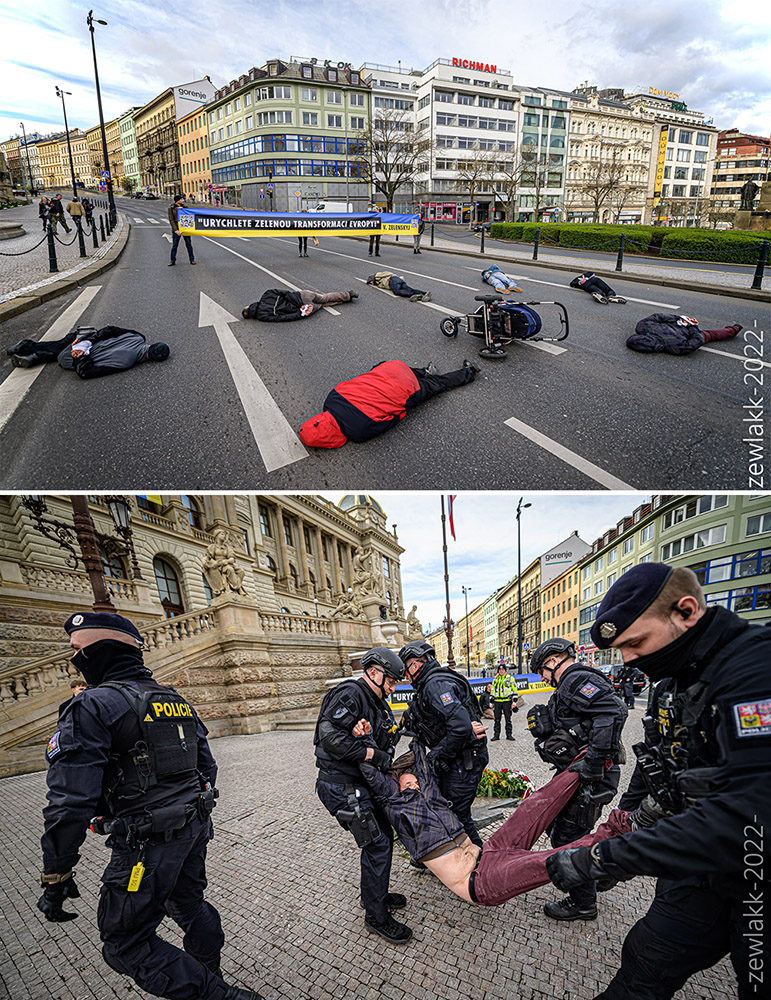 8 April | Prague, Czech Republic For the second week in a row, ‘3°C activists for Ukraine’ blocked roads in central Prague. In order to reduce Czech consumption of Russian gas, they want a maximum temperature imposed on gas heating of offices and buildings and a halt to all new gas investments. They were met with scenes of anger and shocking violence by motorists. Photos: Zewlakk 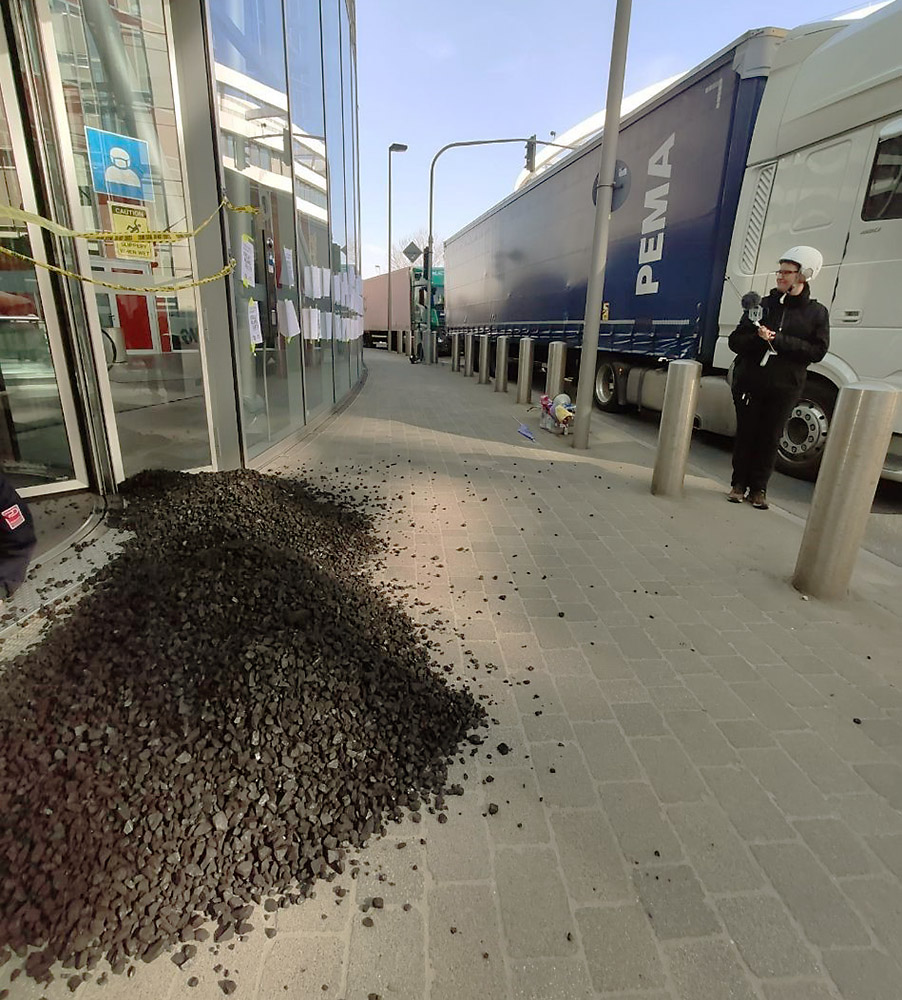 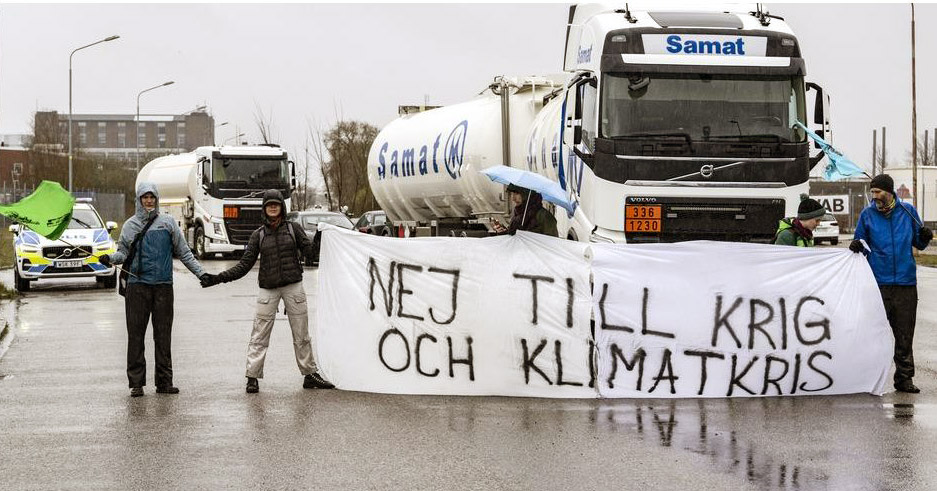 7 April | Malmo, Sweden A dozen rebels blocked the road to Oljehamnen in protest against a ship delivering Russian oil. 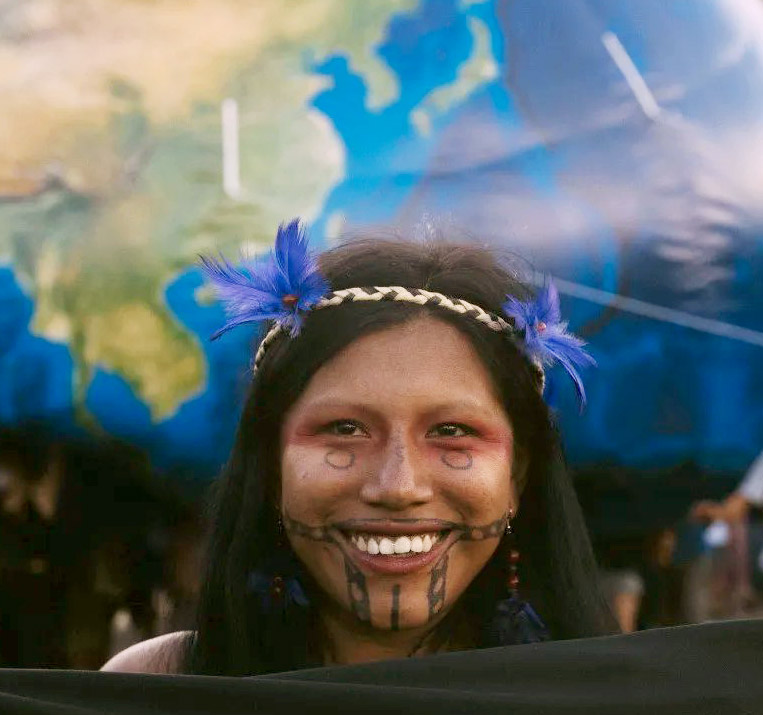 6 April | Brasilia, Brazil Hundreds of indigenous people began gathering in the Brazilian capital for a 10-day protest camp to defend their land rights and oppose a government bill in Congress that would allow mining and oil exploration on their territories. 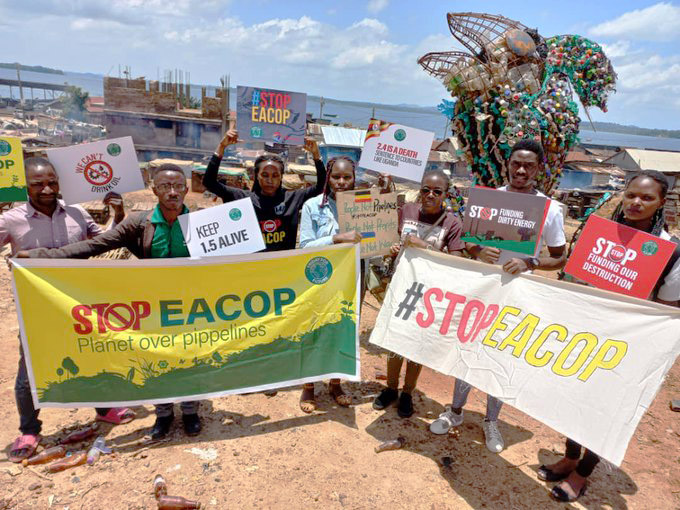 3 April | Kampala, Uganda To keep 1.5 Alive, we must stop our dependency on fossil fuels. Fossil fuels must stay in the ground. Ugandan activists protesting about the East Africa Crude Oil Pipeline (EACOP). 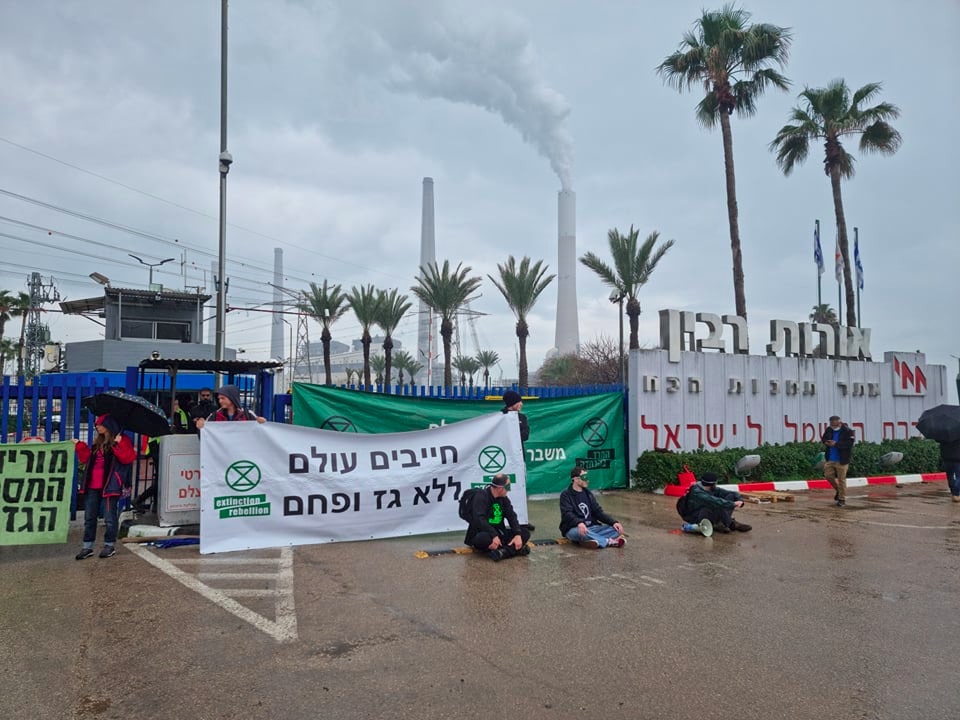 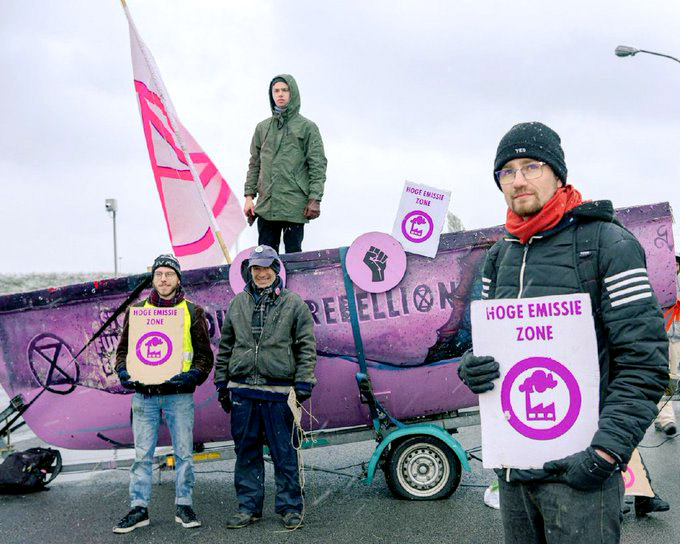 1 April | Ghent, Belgium Rebels blocked the Ghent Coal Terminal, one of the most polluting companies in the port of Ghent, because inaction in the climate crisis is criminal. 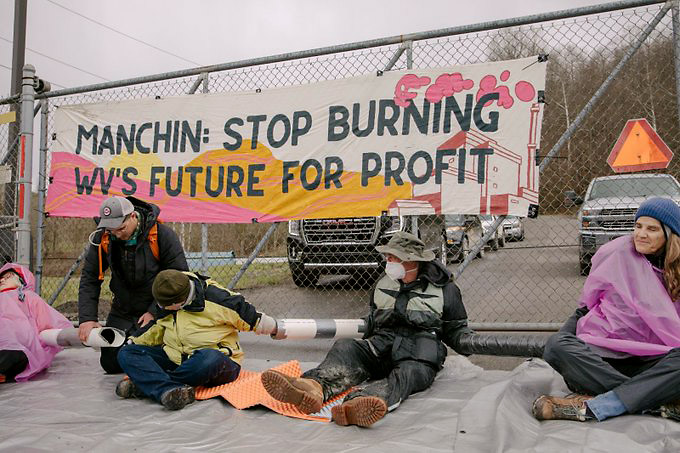 8-10 April | Grant Town, West Virginia, USA Activists blockade the coal plant that put millions of dollars in the pocket of the Democrat US senator who has been blocking US climate change legislation. The activists were moved by state police and had their locks cut in preparation for arrest. 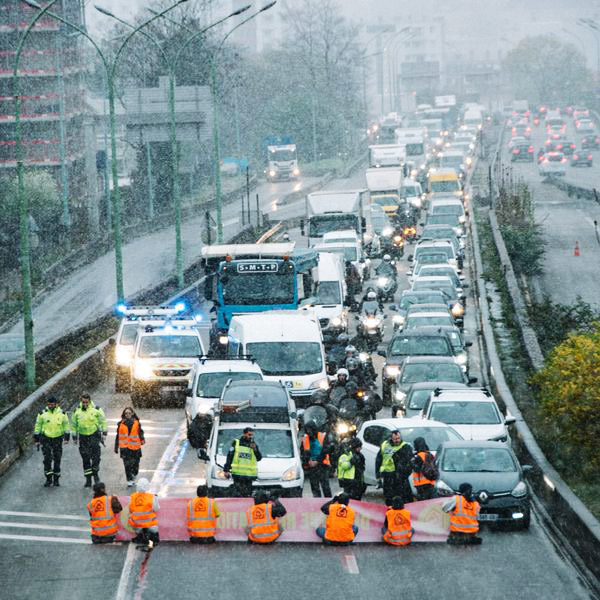 1 April | Paris, France While snow fell, ten brave rebels blocked the Boulevard Peripherique, the busy Paris ring road, for 30 minutes. They were calling for the energy renovation of housing in France, without which greenhouse gases from the residential sector will increase and more than 12 million people will be left in fuel poverty. 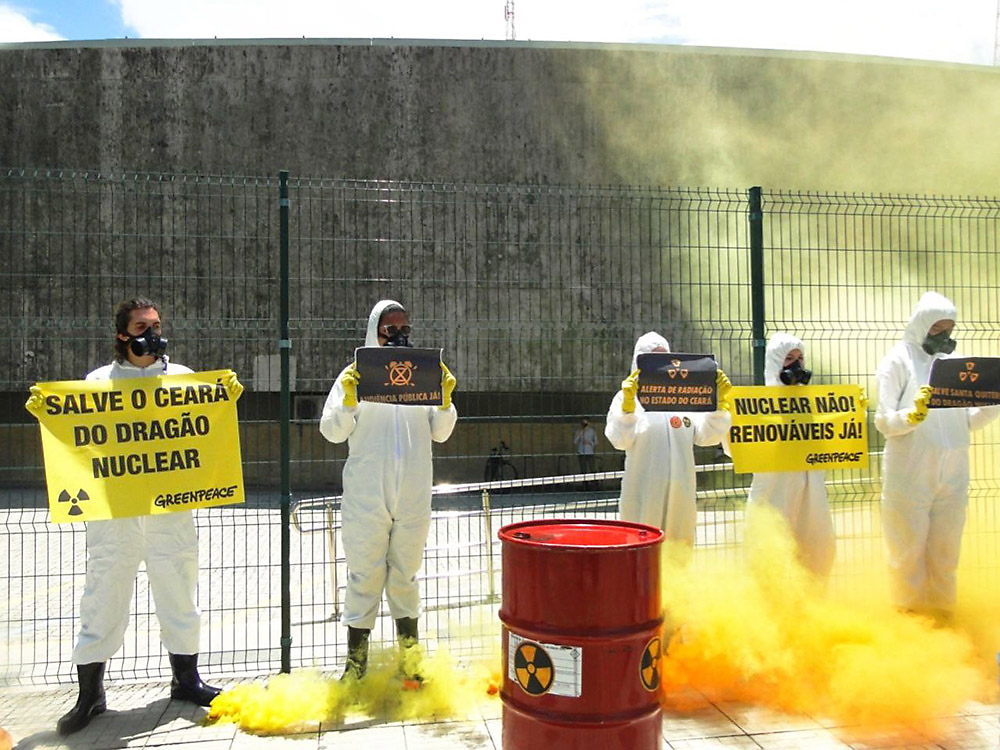 26 March | Fortaleza, Brazil Rebels take action against the reopening of a uranium mine that will be responsible for the misuse of water resources. 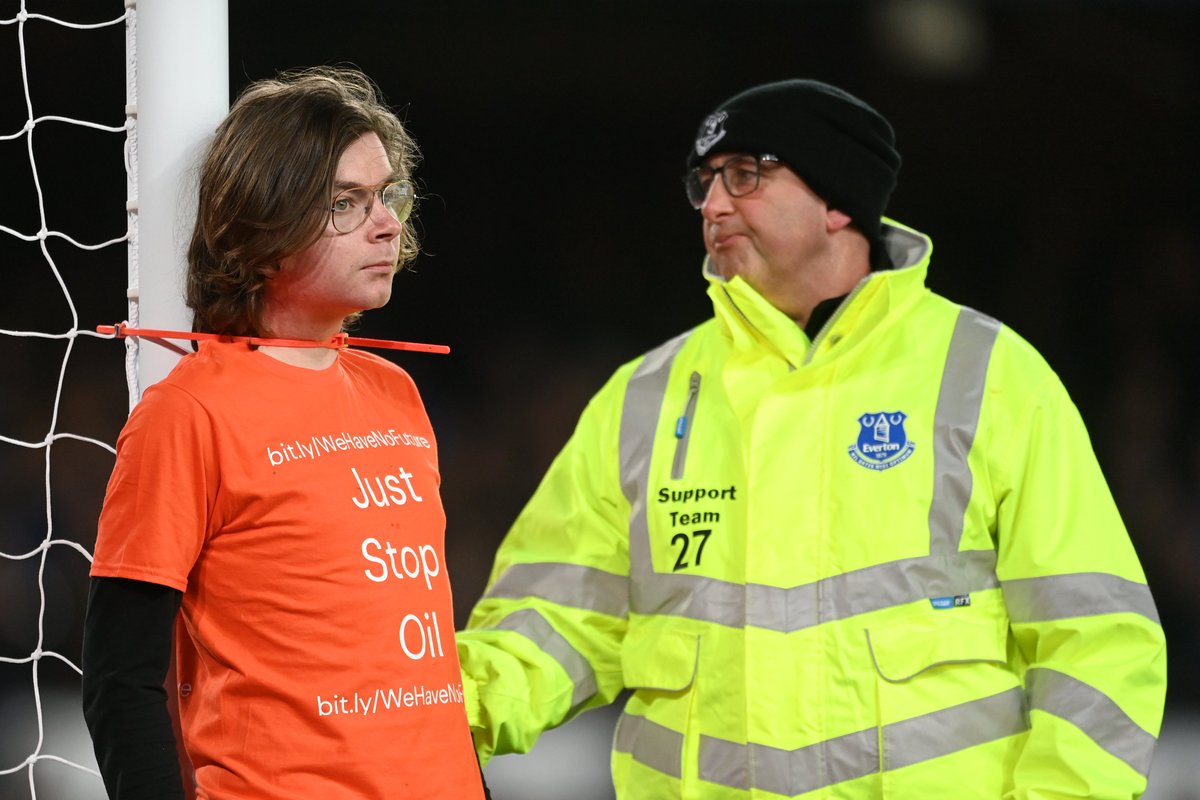 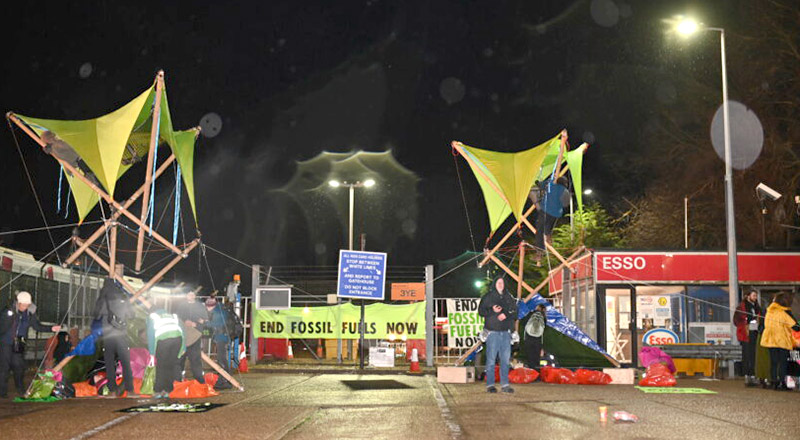 4 April | Heathrow, UK At 4am this morning, Extinction Rebellion returned to the Esso West London Oil Terminal near Heathrow Airport in London. They are currently blocking the entrance with 2 bamboo structures and around 30 people. This is the fourth day in a row in which oil facilities across the UK have been blocked as part of ongoing action by XR and the Just Stop Oil coalition. 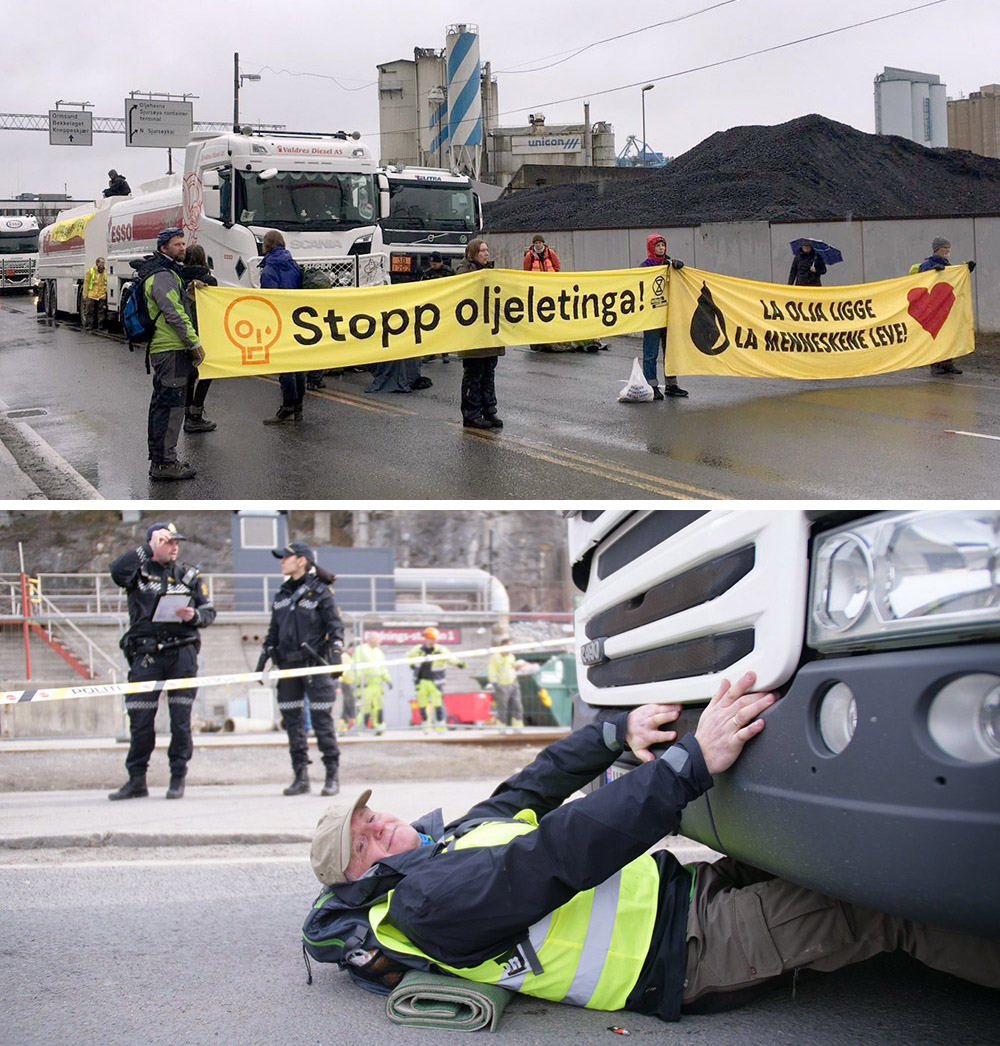 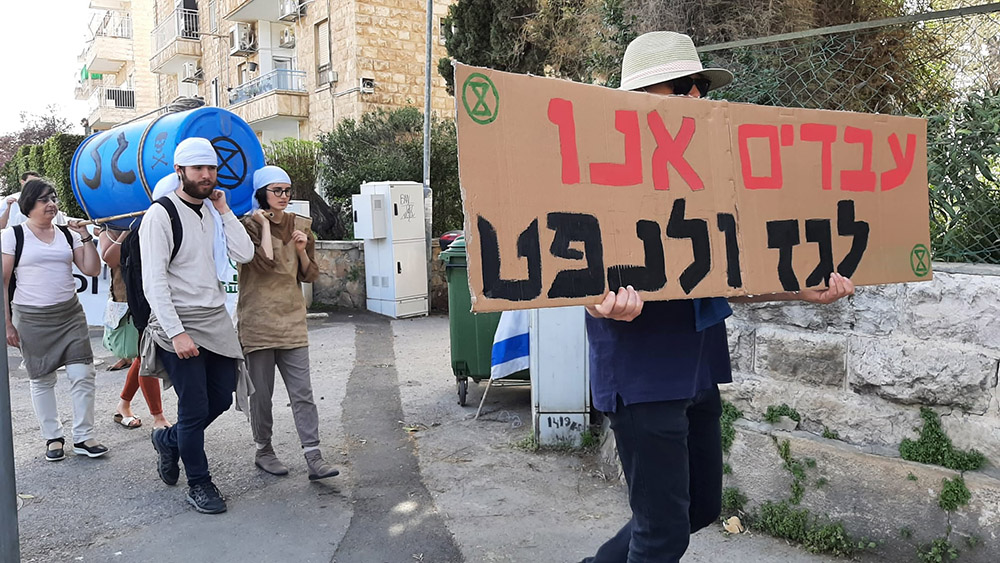 6 April | Jerusalem, Israel Rebels march on the Israeli prime minister’s office, some disguised as slaves and carrying a simulated barrel of oil with the message ‘We are slaves to gas and oil.’ In the recent IPCC report Israel is identified as part of a global ‘hot spot’ heating up faster than the rest of the world. Israeli rebels call the dangers facing Israel ‘the ten plagues of the climate crisis’: flood, famine, fire and heat waves, species extinctions, rising sea levels, war, drought, climate refugees, disease, and economic collapse. 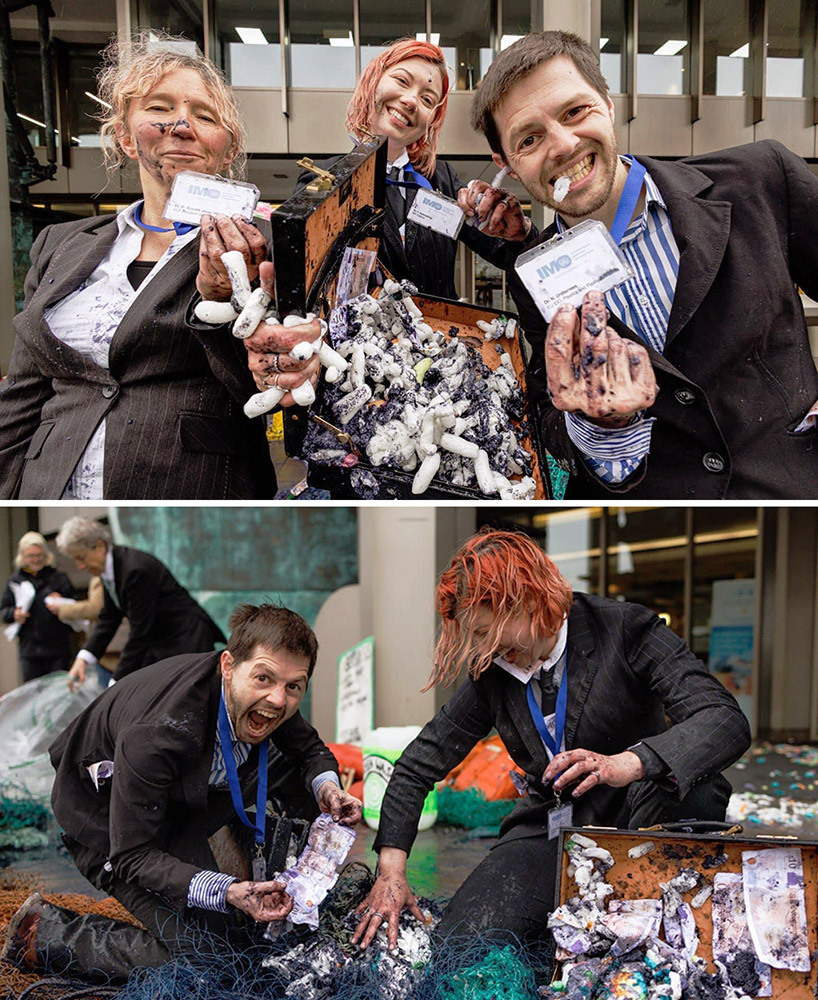 4 April | London, UK Ocean Rebellion activists were at the International Maritime Organisation (IMO) to highlight its continued support of the oil industry, dirty shipping, and plastics pollution. Suited ‘delegates’ released fake ‘plastic’ nurdle pellets at the entrance to the IMO Pollution Prevention and Response conference - nurdles coated in viscose pollutants that stuck to the ground and to delegates' feet. Photos: Crispin Hughes and João Daniel Pereira. 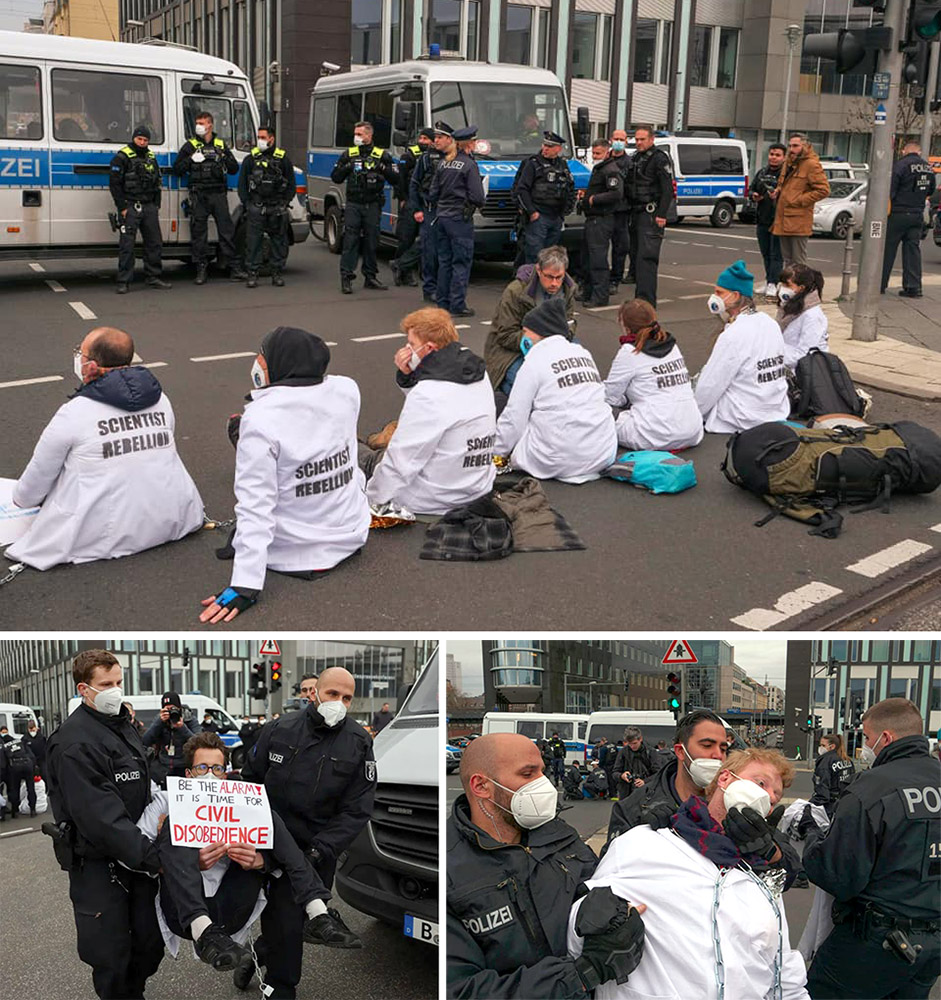 7 April | Berlin, Germany Scientists from across the republic blocked a bridge at the Reichstag for four hours, chained and glued together in an action of civil resistance against a policy that lies and is driving us all into climate hell. 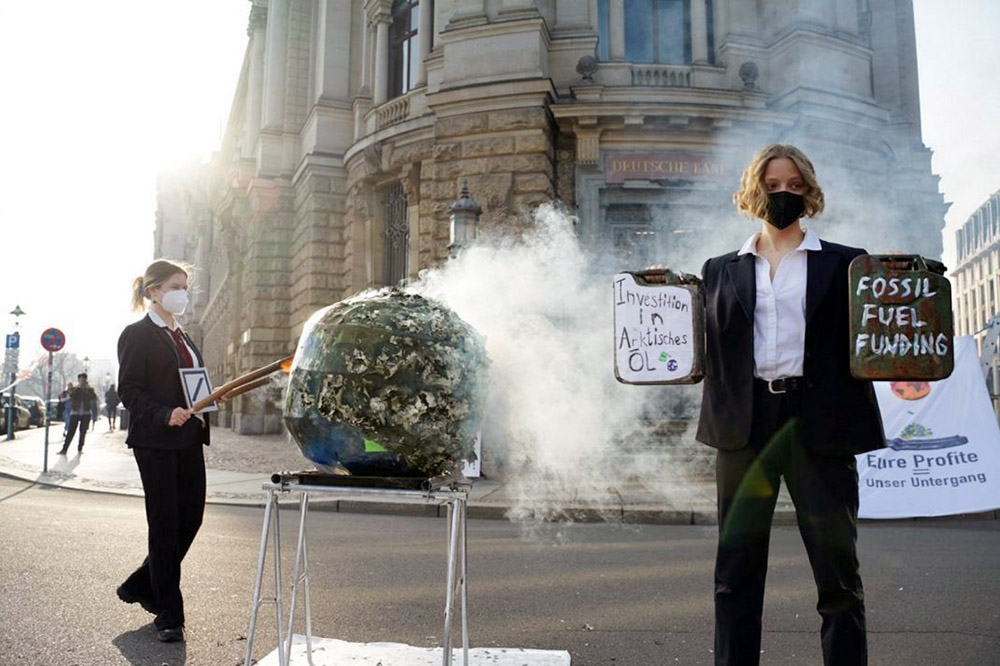 27 March | Leipzig, Germany Earth is burning! An action by XR Leipzig in front of the Deutsche Bank. 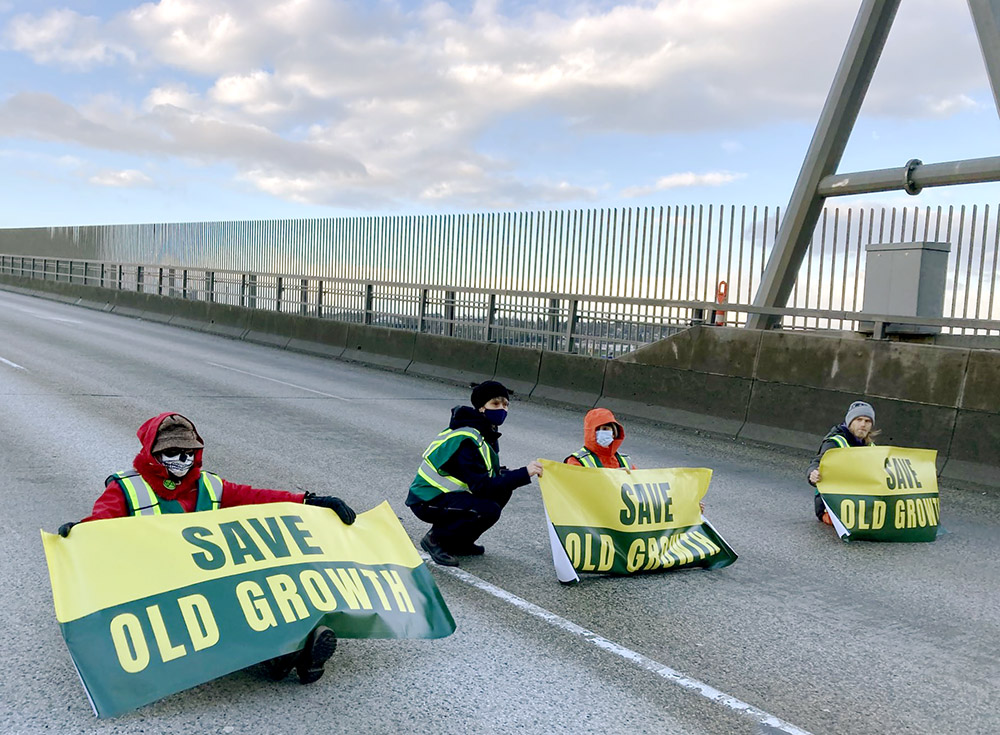 4 April | Vancouver, Canada Supporters of Save Old Growth return to block once again the Ironworkers Memorial Bridge in protest against the endless logging of ancient forests in British Columbia. 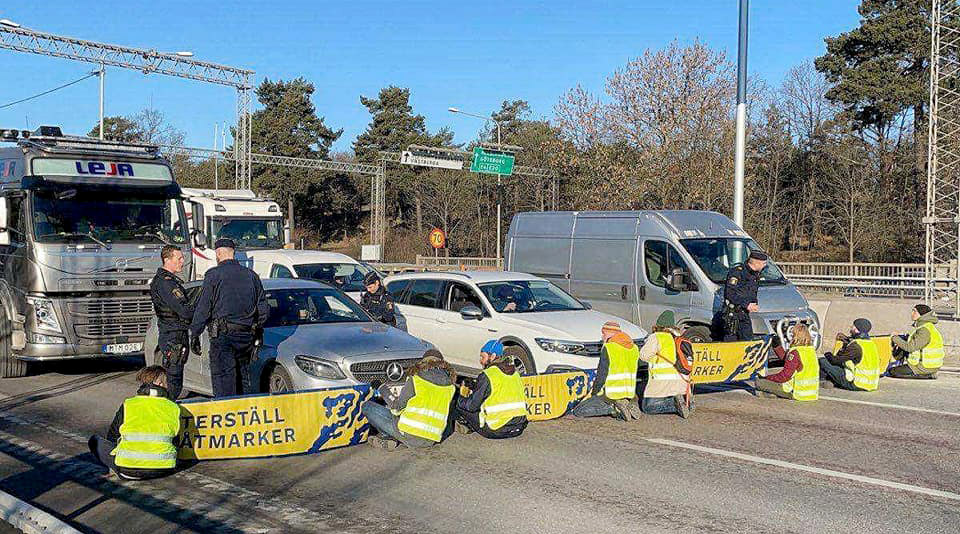 28 March | Stockholm, Sweden Eight rebels were arrested when blocking the central bridge in Stockholm. They were demanding that the government restore wetlands, which would reduce climate emissions by as much as all of Sweden's car traffic. 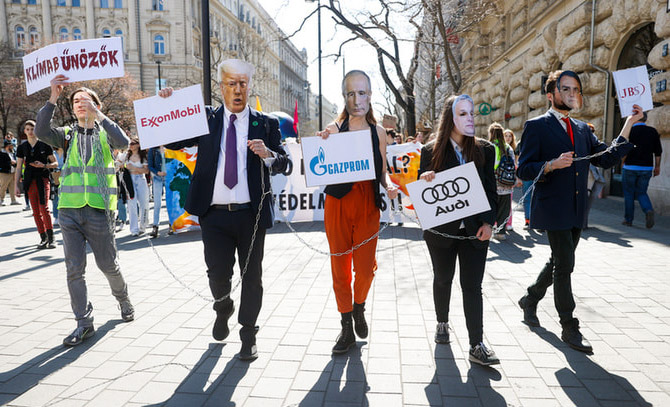 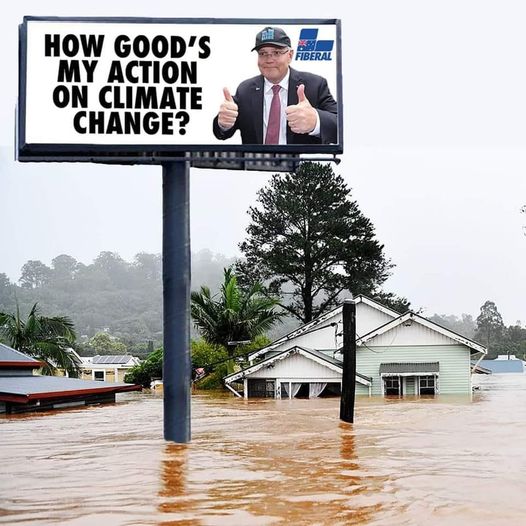 1 April | Australia A special message for flood-afflicted Australia’s ‘Fiberal’ prime minister, Scott Morrison. A coal-addicted climate criminal, Morrison has since called a general election for 21 May. For the sake of the planet and his own country, let’s hope the people vote him OUT OUT OUT!