What is regenerative agriculture and can it feed the world? 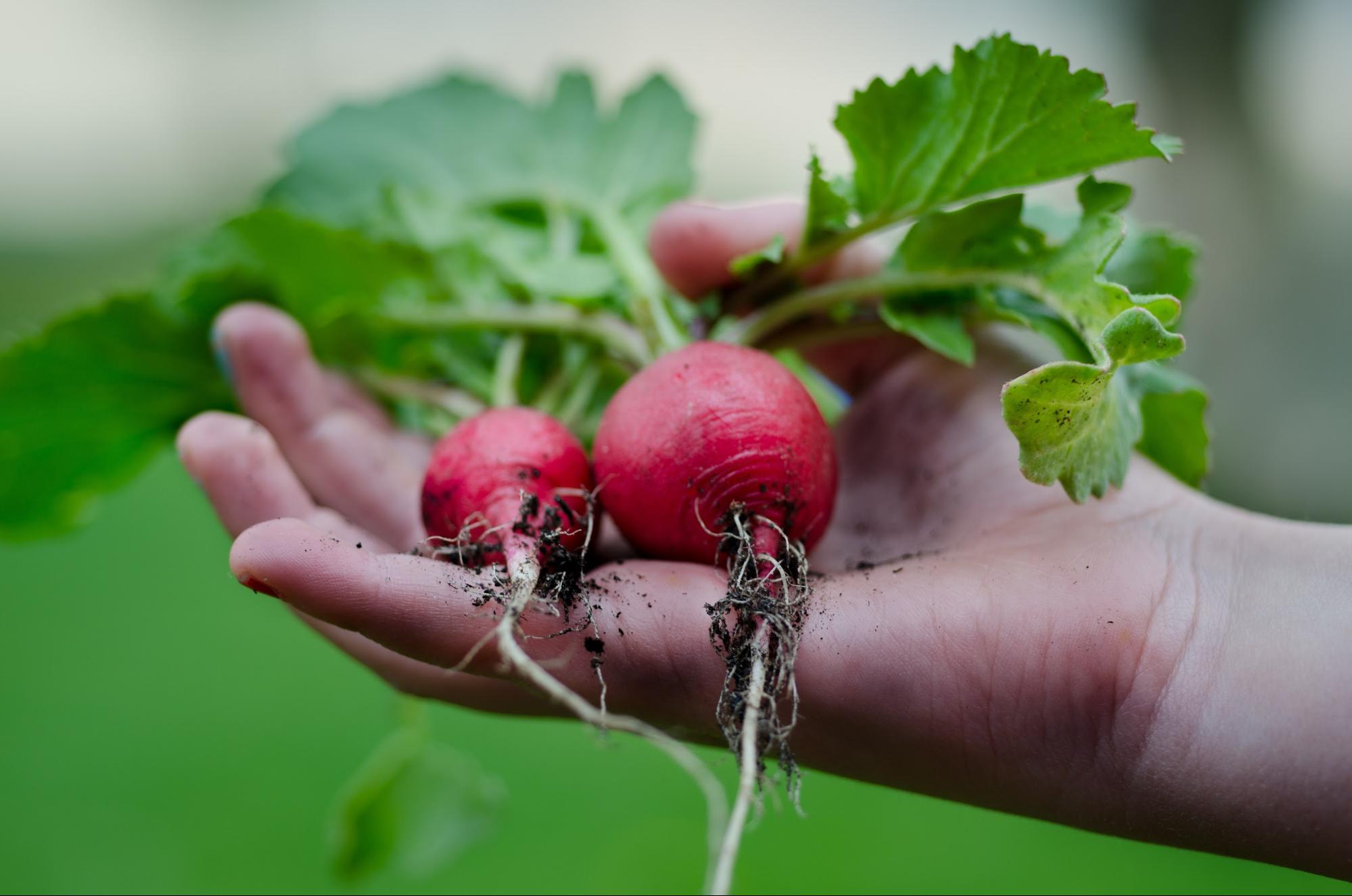 Farming to a dead end

Just like over half of the world, I have lived my life separated from agriculture in urban environments. What do I really know about how my food arrives on my plate? Food packaging and advertising show me happy images of green patchwork landscapes and colourful farming machines ploughing golden fields of lined-up crops. Roughly one-third of the world’s food is wasted every year, which, too, seems to suggest that food is plentiful.

There’s no doubt that industrial agriculture has produced fantastic amounts of food for decades, with each technical innovation introducing another way to reduce human effort while increasing production: tractors replaced horses, and then combine harvesters replaced tractors. We identified nitrogen, phosphorus, and potassium as the elements of plant growth, then created synthetic fertilisers from them. We also discovered herbicides and pesticides, with which farmers could kill weeds and destructive insects by simply spraying them. The industrialisation of farming was a shining example of human ingenuity.

So, what’s the problem? The problem is that our short-term farming solutions are cooking up long-term disasters. 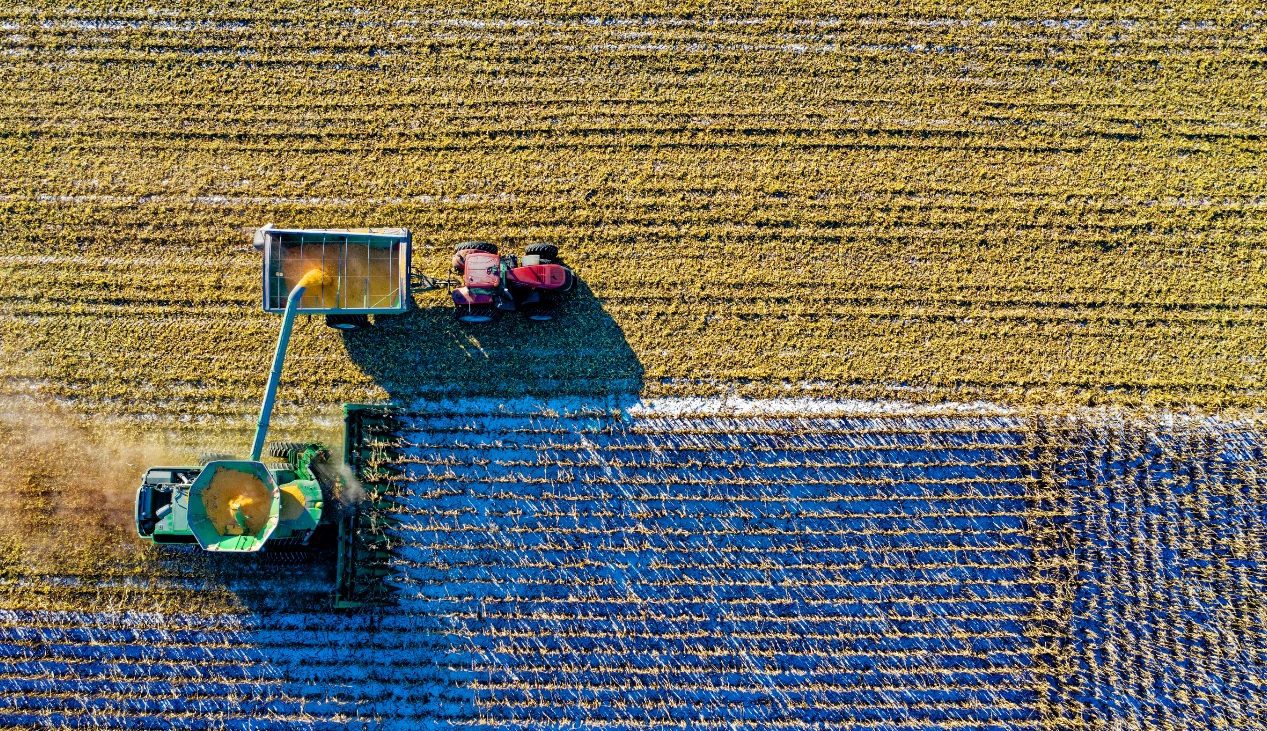 Our intensive farming practices have covered Earth in monocultures: fields dedicated to growing only one plant. After all, if you make more money from growing corn, why would you plant anything else? It’s logical from an economic perspective to intensify farming until all obstacles to the final crop are removed, such as weeds, or hungry insects. In business, greater efficiency equals greater profits, so of course we have intensified our agriculture.

Unfortunately, monocultures decrease the number of natural interactions between different living organisms, because most of them have been removed, or killed with chemicals, for the sake of the crop. In other words, monocultures reduce biodiversity. In the 2020 David Attenborough documentary Extinction: The Facts, soil ecologist Richard Bardgett explains: ‘Soil should be teeming with life. One of the most important things that animals in the soil do is to break down organic matter, which is used for plant growth.’ Monoculture farming crushes these ecological relationships.

We often engage with natural processes as problems to be fixed: we dig up and turn soil before sowing seeds, which degrades the soil and releases greenhouse gases that would naturally stay underground; we clear unwanted plants after harvesting, which exposes bare earth to harsh weather and erosion. Then, as degraded soil cannot retain as much water as healthy soils, we experience unnecessary droughts.

Intensive agriculture is at war with nature. What happens when you suppress your natural instincts for the sake of productivity? For example, if I worked in an office for 12 hours every day, didn’t go outside for a break, nor even made time to stop and eat a healthy lunch, I would probably get more work done. But in the long-term, I’d also become stressed, unhealthy and miserable. This is what intensive agriculture is doing to soil.

As you’ve probably realised, this is bad news. During a World Soil Day 2014 event in Rome, Dutch activist Volkert Engelsman, an Organic Ambassador for IFOAM Organics International, said ‘we are losing 30 soccer fields of soil every minute, mostly due to intensive farming.’ In Extinction: The Facts, Robert Watson (then the Chair of the Intergovernmental Science-Policy Platform on Biodiversity and Ecosystem Services) says, ‘food production in some parts of the world is going down, due to soil degradation and a changing climate’.

The upper layer of soil in which plants grow is called topsoil. The speed at which topsoil builds in the natural world depends on numerous factors, such as topography and climate, but it appears to take approximately 500 years to grow one inch of topsoil. Remember this — I’ll come back to it later.

If we continue with our current, widespread intensive agriculture practices, we will increasingly endanger our food supplies. 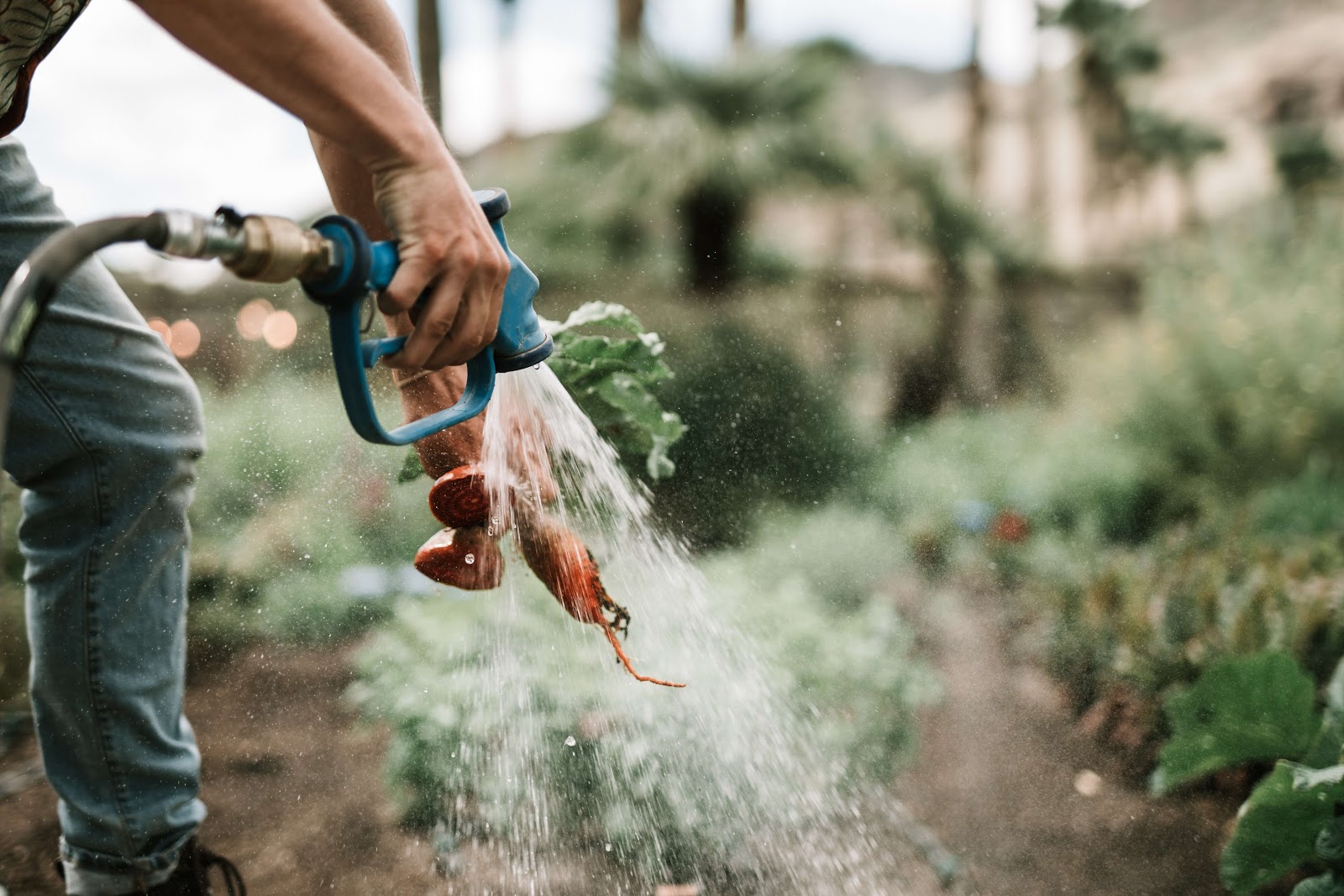 How does regenerative agriculture help?

Farmers who use regenerative farming methods cooperate with nature. They grow plants using methods that revive ecosystems. These methods are complex and various, because each is unique to the ecosystem, soil characteristics and climate of a farm.

Some common regenerative agriculture principles, however, include:

How does regenerative agriculture work in practice?

Was all that information a bit overwhelming? I’m a lifelong city boy with no agricultural experience, so I know how you feel. I recently lived on a small farm called Witchwood, however, which is a great example of regenerative agriculture in action. 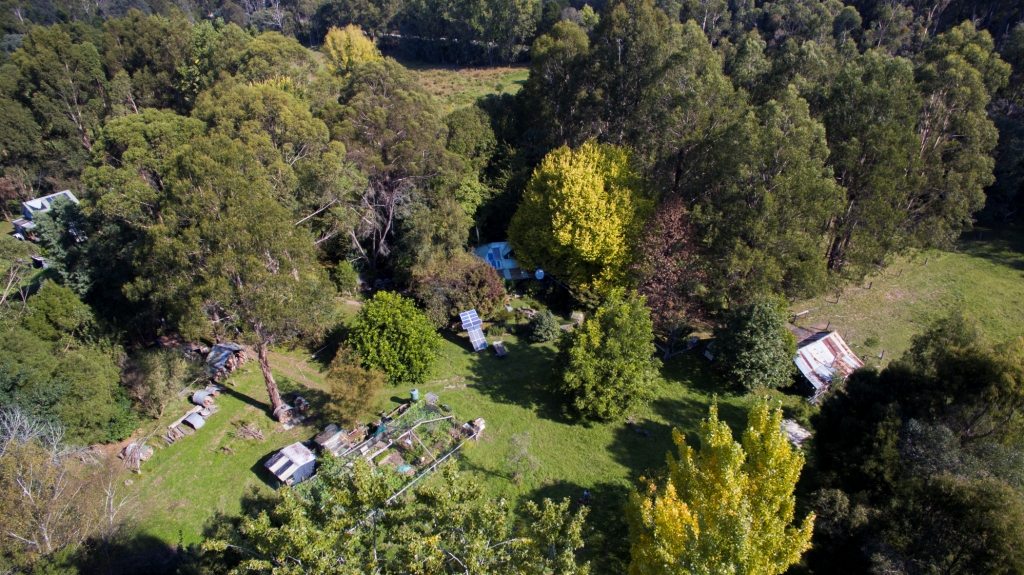 Witchwood farm (above) is a 22-acre farm in the small valley community of Goongerah, 340km east of Melbourne, Australia. Witchwood is owned by Jill Redwood, who also fights to protect the area’s high biodiversity with Environment East Gippsland.

When Jill bought the land in 1983 it was a bare, lifeless field. She gradually added trees, gardens, and fences, creating an organic farm with chickens, geese, goats, and horses. Jill lives as sustainably as possible, which has influenced Witchwood’s design.

How did Jill do it?

I arrived on Jill’s beautiful farm after Melbourne’s long 2020 COVID-19 lockdown. Jill has worked hard to create an environment of thriving ecosystems and organic ingredients, but her journey was quite simple.

‘When I got here, the degraded soil was hard and I didn’t find many worms’ explains Jill. ‘That was the first thing to fix, so I planted loads of native and European trees — they’re both useful. It felt obvious to use natural methods, which seemed to work well. Nature can do the job of chemicals, sprays and artificial fertilisers, if you give her a chance.’

OK, but is regenerative agriculture practical on a bigger scale?

Brown’s Ranch is a 5,000-acre farm in the USA. During the mid-1990s, owners Gabe and Shelly Brown suffered four years of weather-related crop failure and began experimenting with no-till farming, to retain soil moisture and reduce fuel costs. Next, the farm stopped using man-made fertilisers, fungicides, and pesticides and started growing a wider variety of crops. The movement of cattle between pastures was also changed, so that each pasture is left empty after grazing to regenerate for at least 360 days.

As a result, Brown’s Ranch is now a successful business that sells ‘cash crops’, such as corn and wheat, as well as grass-fed beef, pork, lamb and chicken, honey, vegetables and fruit. Gabe Brown is building North America’s regenerative agriculture movement with Understanding Ag and he claims that the farm’s regeneration has produced ‘several inches’ of topsoil in 20 years. 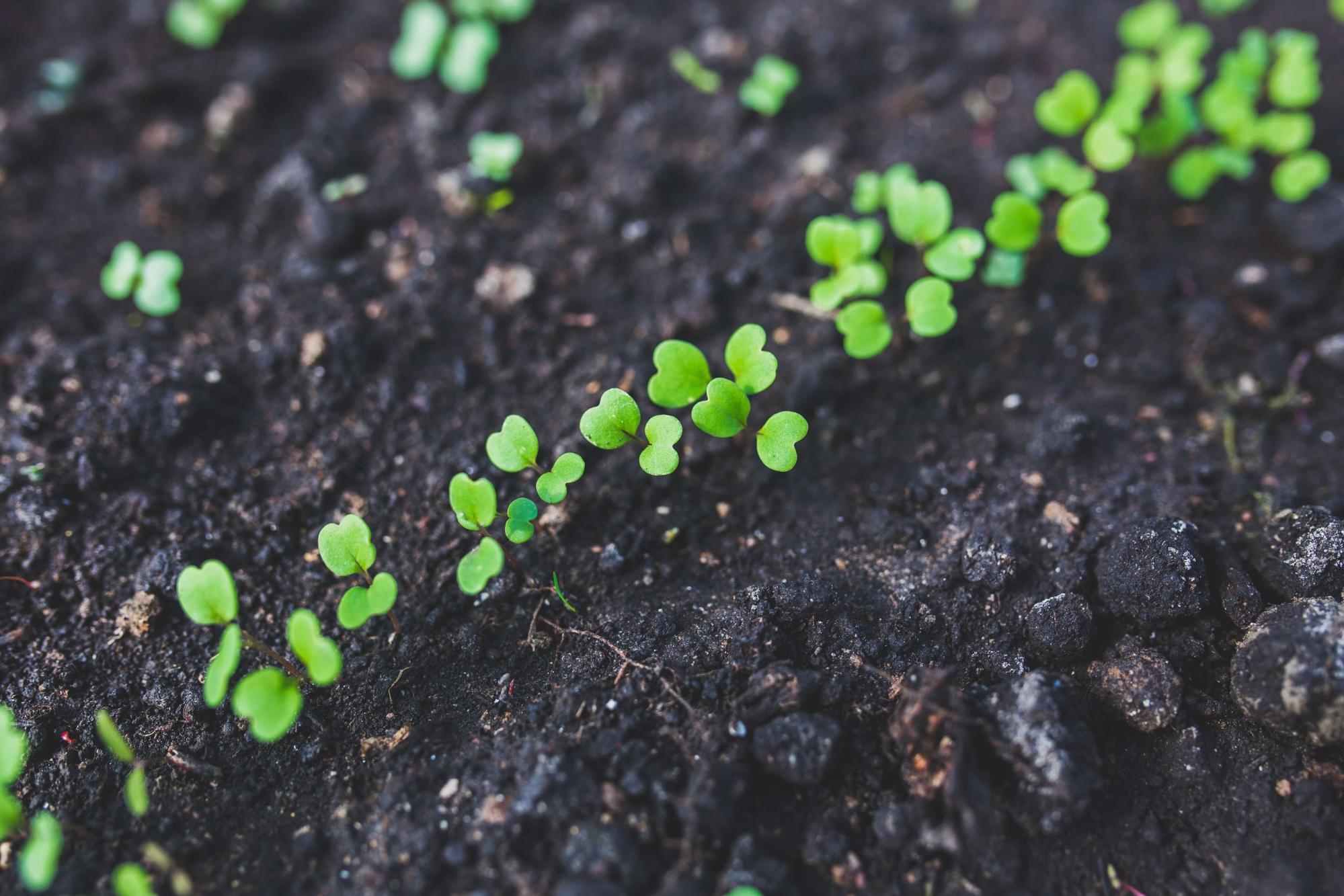 Can regenerative agriculture feed the world?

I have experienced the many benefits of regenerative agriculture for myself, but I fear it might be less efficient than intensive agriculture: it’s no coincidence that population numbers exploded alongside the rise of intensive agriculture. Can we really feed this many humans — and more — without fertilisers, herbicides or monocultures?

One of the largest-ever scientific analyses of regenerative agriculture attempted to answer this question in November 2020. The American journal Science Advances analysed 41,946 comparisons between ‘diversified’ (regenerative) and ‘simplified’ (intensive) agriculture practices. Its results are in the title: Agricultural diversification promotes multiple ecosystem services without compromising yield.

The brains at Science Advances concluded that, overall, farmers do not experience a reduction in crop yields when they adopt regenerative agriculture practices. The study also underlines that every farm requires its own balanced combination of these practises in order to achieve the best results, which is one of the biggest challenges facing farmers who wish to switch.

What about the economics?

Crop yields should not be the sole criterion by which we judge the viability of regenerative agriculture, especially not its economic viability. More crops do not automatically result in more money for farmers. In the case of Brown’s Ranch, Gabe Brown claims that after years of financial strife the ranch now generates 100 USD profit per acre, per year. ‘If you build a healthy farm ecosystem, you’re going to be resilient’, says Gabe.

In 2017, Project Drawdown released Drawdown: The Most Comprehensive Plan Ever Proposed to Reverse Global Warming. The book assesses and ranks every global heating solution available. If implemented together, these solutions would cause global greenhouse gas emissions to peak, then decline — ‘drawdown’. Editor Paul Hawken and a team of nearly 70 researchers compiled the book, then an advisory board of 120 people including climatologists, biologists, economists, and financial analysts validated the facts. Drawdown concludes that ‘regenerative agriculture could provide a 1.9 trillion USD financial return by 2050 [globally], on an investment of 57 billion USD.’ 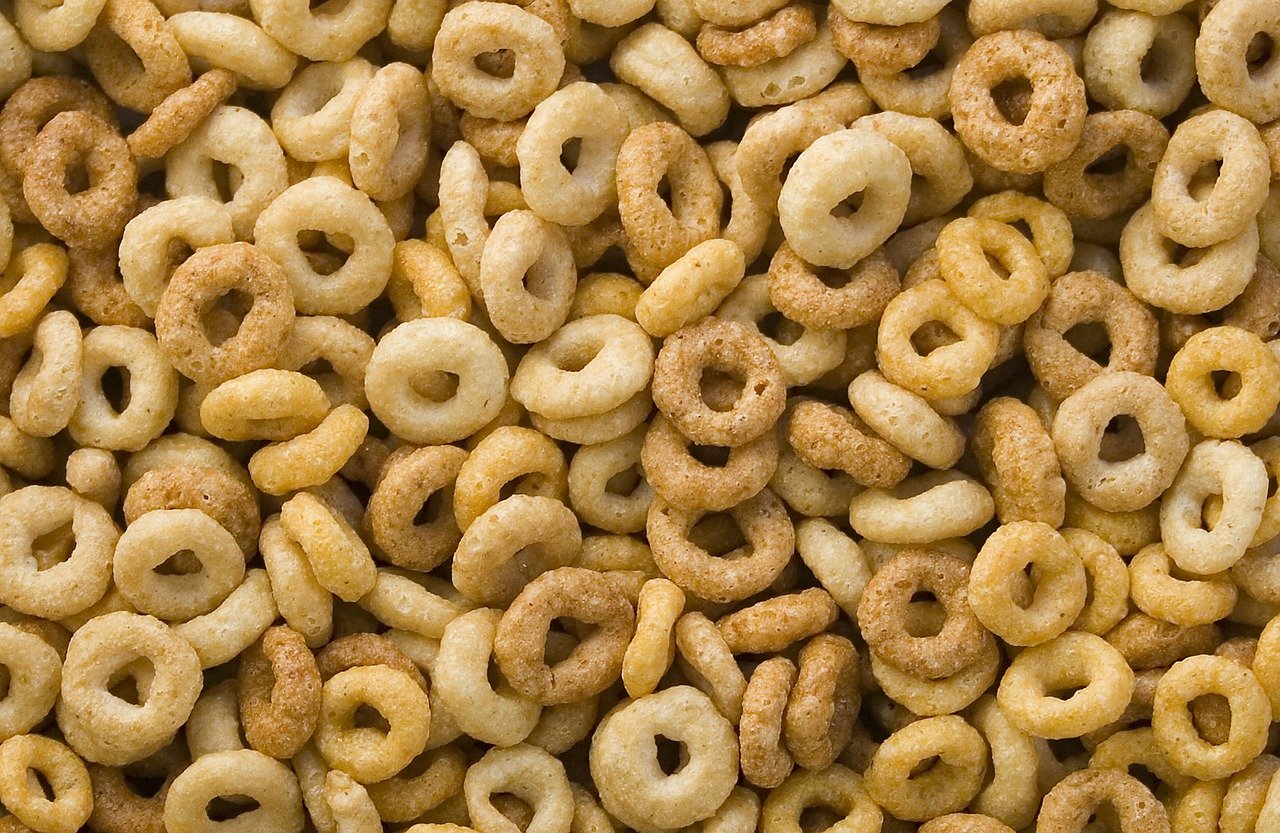 1.9 trillion USD is a very large pie, so it’s unsurprising that massive food companies want a slice. General Mills plans to bring regenerative agriculture to one million acres of land by 2030. If General Mills sounds familiar, it’s probably because this huge company is behind brands including Cheerios, Häagen-Dazs, Wanchai Ferry, Yoplait, and Betty Crocker.

The North American company is promoting many of the ideas I have covered, with its ‘six core principles’. These principles are very similar to those used at Witchwood and Brown’s Ranch, such as minimal soil disturbance, the need to keep soil covered, and the integration of livestock.

General Mills is also investing in research, such as a long-term study of cover-crop benefits at the University of Manitoba.

General Mills’ plans suggest that sustainable farming practices are spreading, but is this a global trend? Project Drawdown attempted to answer this mighty difficult question in 2017, estimating that the amount of land on which regenerative agriculture is practised would increase from 108 million acres to one billion by 2050 (for context, in 2016 it was estimated that 12 billion acres, or 4.87 billion hectares, were dedicated to agricultural purposes worldwide).

Project Drawdown’s (conservative) estimate was based on the speed with which organic farming has been embraced globally, combined with the expectation that farmers currently incorporating one or two regenerative agriculture practises will eventually abandon all degenerative practises (as Gabe Brown did at Brown’s Ranch). Furthermore, Project Drawdown predicts that 424 million acres of abandoned, degraded farmland could be restored using regenerative agriculture by 2050.

What else needs to change?

Trying to judge regenerative agriculture’s global potential is a colossal task, but its economics, crop yield and scalability all show promise. Agriculture, however, is just one part of our global food system, in which many improvements must be made.

The World Resources Institute highlighted this in its 2018 report, Creating a Sustainable Food Future. As well as stating the importance of many regenerative agriculture principles, the report concluded that reductions in food waste, a shift to sustainable diets, the restoration of peatlands, and improved wild fishery management were all vital to securing a sustainable food future.

The global food system is complex enough to make your brain explode, but two hard facts are at its core: without healthy soil, food struggles to grow; without food, humans cannot exist. Our overwhelmingly widespread intensive farming methods are threatening soil health across the world.

The Soil Science Society of America says one inch of topsoil can take several hundred years or more to develop. Regenerative agriculture defies such limitations: Gabe Brown produced several inches in 20 years; Jill Redwood told me she has found forgotten gardening tools at Witchwood ‘covered by five or six inches of soil.’

We are not destined to fail. Regenerative agriculture is further proof that if humanity works with nature, instead of against it, we can build a healthier and brighter world.