Palm Jumeirah is a set of artificial islands located in Dubai in the United Arab Emirates (UAE). More sand than you could even imagine was dredged from the sea floor to mould the islands into a palm tree shape. The crescent-shaped breakwater was built using blasted mountain rock. These islands were not created out of necessity. They were designed to cater to the global rich. Glitzy hotels dot the skyline, luxury villas line the beaches and opulent restaurants cater to the 0.1%. A penthouse lounge can have a bar-scene-from-Star-Wars vibe, albeit with $100 steaks and $1,600 bottles of alcohol. By day yachts and speedboats surround this cesspool of decadence. By night the clubs drip with champagne.

The endless calls for “growth, growth, growth” are driving projects like Palm Jumeirah around the world. But this is creating environmental disaster and immiserating human livelihoods in the process.

Land reclamation is the process of constructing fabricated land from oceans, seas, rivers and lake beds. Water can be drained from shallow areas, or the bed raised, making the land available for development. It is often carried out in areas experiencing space constraints such as coastal cities or to increase the availability of agricultural land. The UAE is mostly desert, and cities such as Dubai have seen population increases as the economy expanded. It may not seem unreasonable for these places to broaden their natural limits to provide accommodation and livelihoods for their people.

But land reclamation has severe environmental consequences. It threatens those same livelihoods it’s supposed to serve. Our planet relies on these coastal ecosystems for biodiversity and greenhouse gas absorption. And at the root of this artificial expansion is remorseless economic growth. Land reclamation caters to a global economy that requires more shipping, more flights, more oil and more stuff. Palm Jumeirah is an egregious example of a regime that washes its reputation on the shores of a tourists’ playground and batters the environment in the process.

The Gulf has a unique marine ecosystem due to its shallow waters, arid conditions and warm sea temperature. The coral reefs and mangrove forests support fish, dugongs and turtles. This ecosystem already exists in extreme conditions and it doesn’t take much for a tipping point to be reached. Researchers found the water temperature around the Palm had increased by 7.5%. Reefs degrade in these conditions. Warming waters also cause sea levels to rise and the irony is that the Palm cannot handle the expected rises that will occur over this century.

Palm Jebel Ali is a project with similar aims to Palm Jumeirah but 50% larger. Over 8 km2 of natural reef habitat was destroyed during its construction. These projects prevent normal water flow from the sea which has serious consequences for marine life. Sea turtles, for example, have become endangered by reclamation. 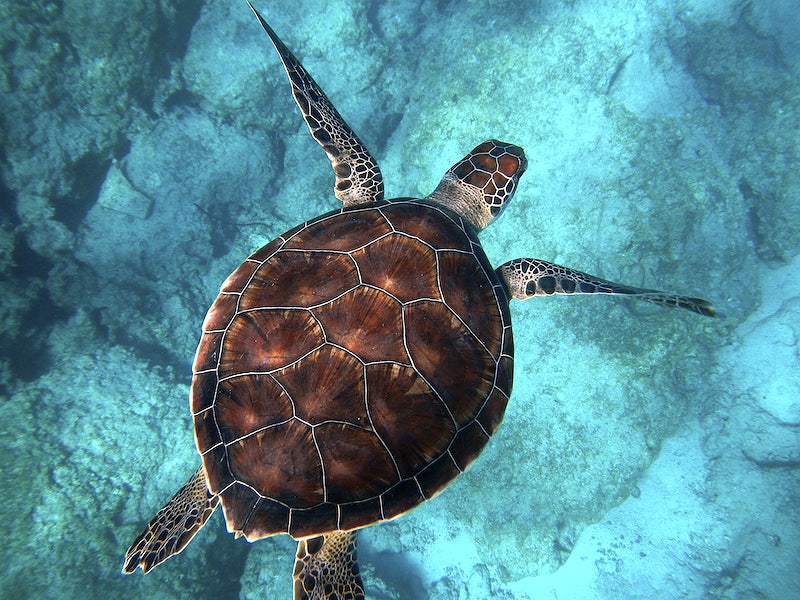 Another irony is how this land reclamation is being funded through fossil fuels. The UAE became rich by selling planet-destroying oil and gas and then used this money to further wreck the natural environment. Worldwide, land reclamation is often specifically for fossil fuel extraction or to enable its trading. Carbon-intensive infrastructure such as airports, shipping and factories, and agricultural development, are also driving the creation of artificial land.

Land reclamation for oil and gas

Rotterdam has Europe’s largest seaport. Over 40% of the goods passing through are oil, coal and gas. The port stretches over 40km and projects into the North Sea through the reclaimed Maasvlakte area. When construction began in 1965 the De Beer nature reserve was one of Europe’s most important breeding grounds for the seabirds of the North Sea. But the development of Maasvlakte destroyed it. Reclamation also caused the disappearance of important ecological features of the landscape. Riverbanks were turned into quays and concrete debris. Maasvlakte 2 expanded the port by reclaiming land adjoining the original Maasvlakte. It was initially rejected on environmental grounds and only proceeded thanks to compensation agreements for the ecological harm it would cause.

Land reclamation in Singapore has enabled the country to build one of the world’s busiest ports. Much of the global supply of oil passes through here. The Jurong Port tank terminals boast of their state-of-the-art facilities for oil refinement. Before reclamation Singapore had thriving ecosystems of wetlands, mangroves and coral reefs. Now the local environment has been devastated by the artificial expansion of the coastline. 95% of mangroves and 60% of coral reefs are lost, partly driven by the fossil fuel trade. Species like the dragonfly Indothemis limbata are critically endangered.

The environmental crimes committed in the Niger Delta have been well exposed. Thousands of oil spillages have laid waste to forests and wildlife. An investigation concluded that Shell was complicit, not only in this ecocide, but also in the murder of protestors campaigning against it. Much of the oil and gas development has depended on land reclamation. Exploration, laying of pipelines and wellhead construction have required dredging of swamps and clearing of vegetation. 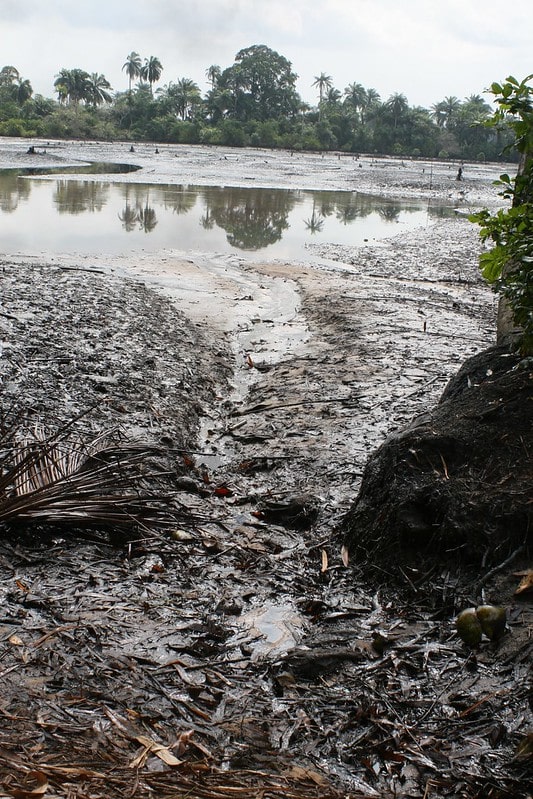 With one of the longest coastlines in the world and a high population density, China has embarked on huge land reclamation projects. Shanghai built an airport on tidal flats (level muddy surfaces next to an estuary) in the Pudong district and artificially expanded nearby islands to develop its port. The wetland ecosystem in Pudong has collapsed with only 8.9% remaining. Reclamation activities around Chongming island in the city led to massive declines of Tundra swans. In 1986–1989 3,500 were counted compared to only 51 in 2000/2001. To give larger vessels access to Shanghai’s port, large amounts of the seafloor were dredged at the mouth of the Yangtze River. This resulted in an 87.6% decrease in the number of species of animals living on the seafloor.

Much of China’s east coast has been reclaimed for port development and industry. The Shuangtaizi Estuary of the city of Panjin saw a loss of 60% of its wetlands over 15 years. Qingdao port development destroyed valuable ecosystems. Reclamation projects in the South China Sea caused species like juvenile Mugil ophuysen fish to suffer mass mortality.

Factories and manufacturing enterprises line the reclaimed land of Tokyo Bay. Large parts of the ecosystem have been damaged by the concrete and landfill required for development. Mantis shrimp have almost disappeared and attempted conservation efforts have failed to lead to the species’ recovery. Across the Sea of Japan, South Korea’s Saemangeum land reclamation project has turned 400 km2 of sea into land for factories, golf courses and water treatment plants. This area used to be an important feeding ground for globally threatened birds and has destroyed the wetlands they rely on. The spoon-billed sandpiper and spotted greenshank are now facing extinction. 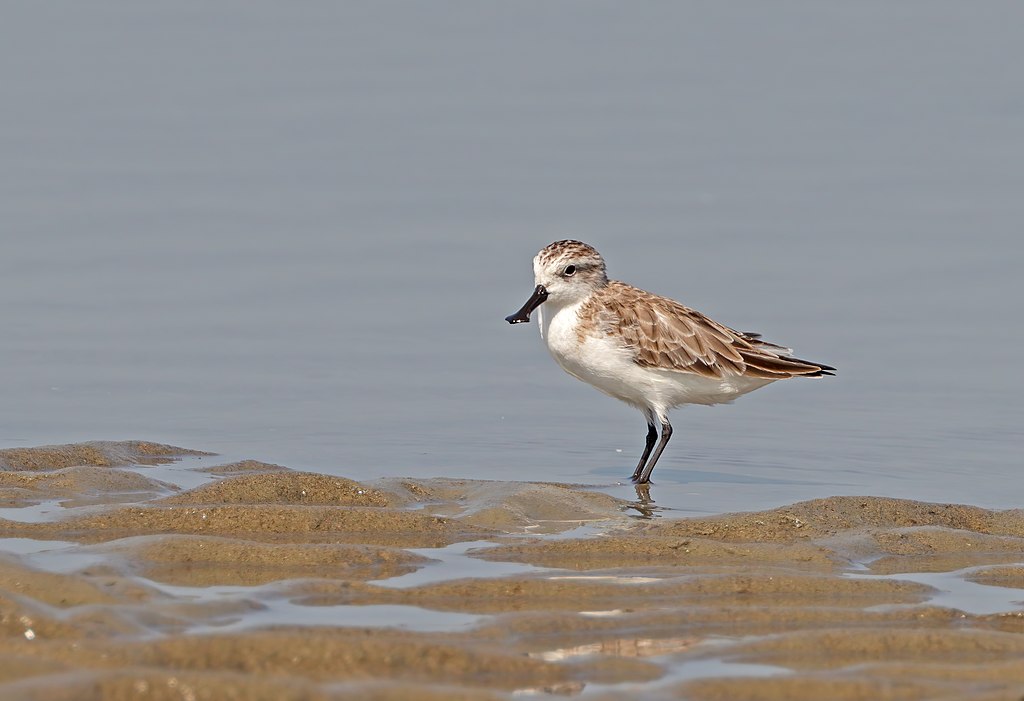 Indonesia and Malaysia have seen rapid clearing of peatlands for agriculture. These areas are permanently flooded and characterised by soils made up of dead and decaying plants. This accumulates over centuries and forms peat, an important carbon sink. Indonesia has 210,000 km2 of peatlands and 7% of Malaysia’s total land area contains peat soils. Over 90% of these areas are seeing declines and 40% of Indonesia’s mangrove forests have been lost. Often peatlands are reclaimed through controlled fires but this can lead to devastating greenhouse gas emissions and pollution. Peat is 90% water and 10% organic matter, and highly flammable. When on fire it can smoulder underground for weeks. In 2015 major fires in Indonesia released more greenhouse gas emissions than Germany’s annual emissions and triggered respiratory illnesses in half a million people.

Land reclamation is also for the exploitation of palm oil. Indonesia and Malaysia are the world’s largest producers of this product. And it’s in everything. The goods we see in rich country supermarkets: laundry items, toiletries, lipstick, ice cream, instant noodles; all contain palm oil.

Japan and South Korea have also reclaimed land for farming. The Isahaya Bay wetland in south-west Japan was one of the country’s largest. It was a refuge for migratory birds, and 282 species of animals were identified on the seafloor. In 1997, completion of a dike drained the wetland making it available for agriculture. This wrecked the ecosystem by worsening sea water quality and soil. Many species including mudskipper fish have become extinct.

A common thread throughout these examples is the loss of wetlands. They are often threatened by reclamation as they lie next to seas, rivers and lakes, and have a shallow shore making construction easier. Their ecosystems sustain the earth’s life support systems. They are carbon sinks with areas like peatlands storing 30% of all land-based carbon. As the climate has worsened they are becoming even more important for carbon storage. Nearly 40% of all species rely on wetlands making them crucial for global biodiversity. Yet 35% of the world’s wetlands were lost between 1970 and 2015. What we’re losing is more valuable than what we’re gaining. This has coincided with extraordinary economic growth as world GDP increased from $24 trillion to $108 trillion in 45 years. The tales of this growth are concrete paving over floodplains, swamps drained of their water and coastal marshes dredged to oblivion. 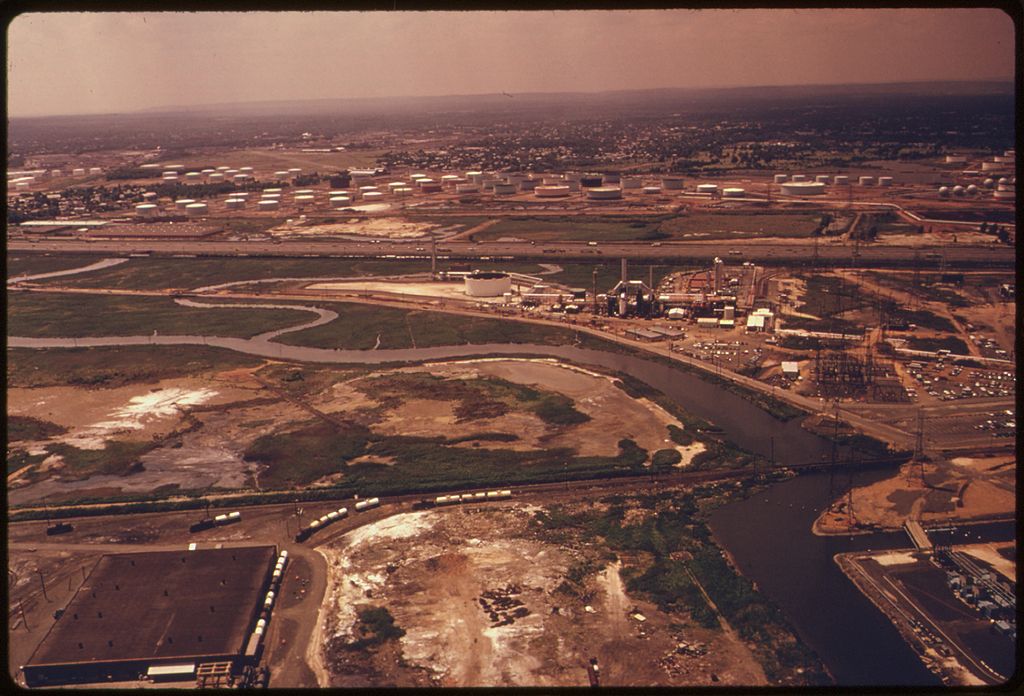 Humanity also depends on wetlands for food. Rice is a staple of diets worldwide and grown in wetland areas. Before oil exploration inhabitants of the Niger Delta made a living as farmers, fishermen and hunters. The Delta supports the growing of rice, fruits and vegetables. Wetlands also protect us from storms and floods through rain absorption and buffering of the sea. Mangroves and salt marshes help shield 60% of the world’s population living along the world’s coastlines. Land reclamation leads to sea-level rise that can be much higher than background levels of local and global rises. This land will likely be impacted first when the climate worsens. As the world races to consume more we are cannibalising the very systems that give us life.

What we should be reclaiming

In 1996 a photographer, Michael E. Stanley, visited Isahaya Bay before reclamation. He described an area teeming with life as frogs, crabs and other fauna zipped around this precious wetland. He returned a year later after the area was drained. This is what he described:

The gata (tidal mud) had dried out and cracked deeply. The remains of small animals were scattered across what had been a galaxy of life. Nothing moved; the clicking, gurgling sounds of the crabs and the cries of gulls and terns were replaced by an occasional rustle of wind, nothing more.

The government’s commitment to endless growth forced this project through despite it being unnecessary. The project was initially conceived as a way to increase rice production. When that proved false the argument switched to being about satisfying beef consumption. The uptick on a graph was more important than safeguarding nature.

With unrestricted growth and land reclamation, the trauma of Isahaya Bay is being repeated around the world. Pollution is increasing and biodiversity is declining, putting our world at greater risk of catastrophe. The term “land reclamation” implies we are taking back what is rightfully ours and another example of how the words we use reflect ecocidal mindsets. We cannot claim the entire earth in order to satisfy neverending consumption. The natural world needs greater protection so it can sustain and protect us.

Join XR now to reclaim our right to a healthy environment and society.

Stephen writes about the climate crisis on his Substack.