Navigating Your Relationships in an Age of Climate Crisis 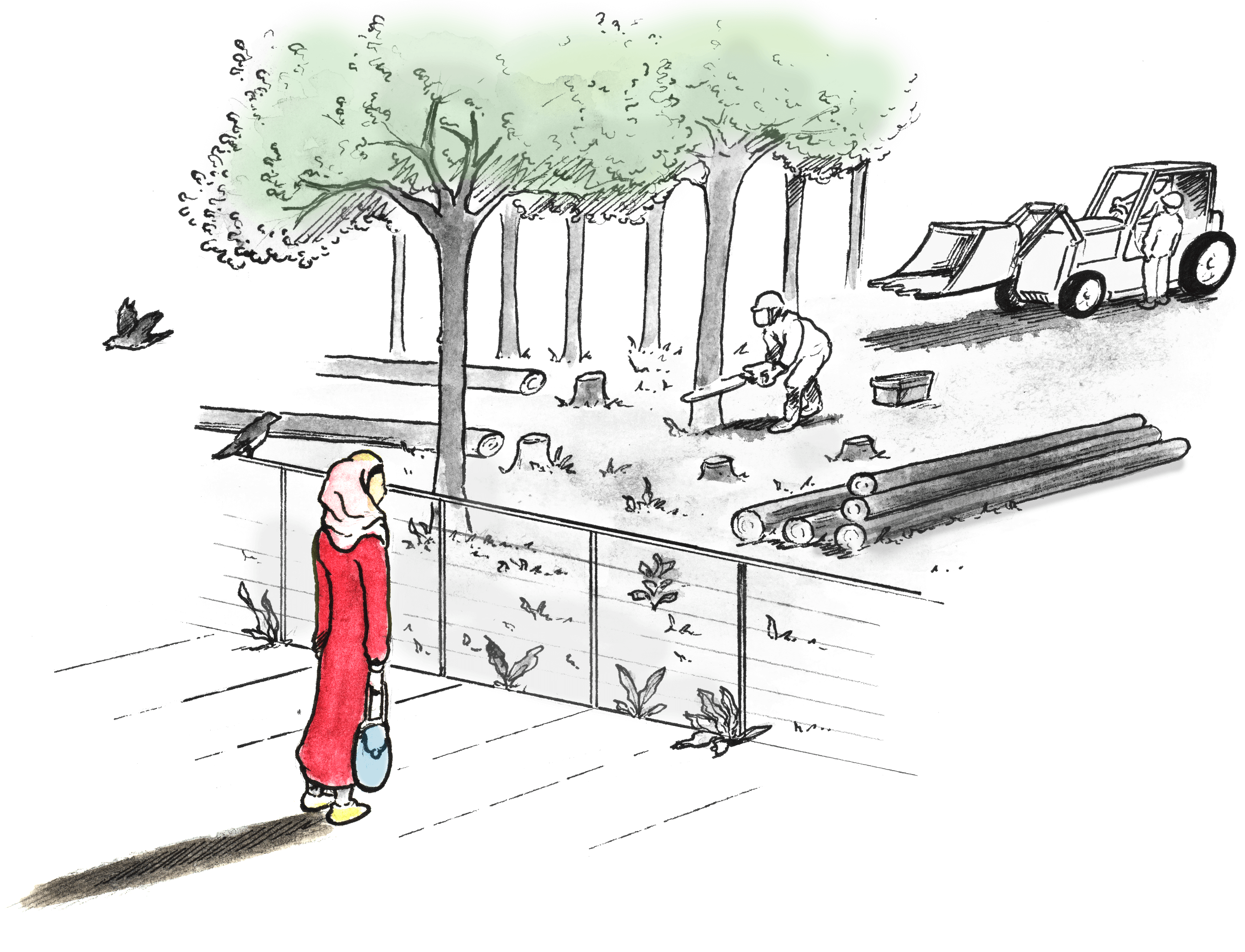 This is not an article about the phenomenon of eco-anxiety. Reams have already been written about ecological anxiety, including XR’s Special Report: A Short Guide To Eco-anxiety. Thankfully, this response to the climate and ecological crisis is increasingly accepted by professionals to be quite understandable from those of us focused on the perilous state of our planet… or anybody who’s paying even the slightest attention to the news. This article is about why some of your loved ones are struggling to support your eco-anxiety.

I am an anxious person. I didn’t tell anybody I was gay until I was 17, which taught me that I either talk about what’s on my mind with the people I love, or my day-to-day life becomes difficult. Of course, gay men approach their sexuality and life decisions in a myriad of ways, but for me, repression from expression lead to depression.

The climate and ecological crisis smashes around inside my head like rocks in a washing machine. I’ll see a bird and think about how few there are compared to 50 years ago. Or, while I compost my food waste, I wonder about people I know who have the facts and tools to also do this, but don’t. These thoughts build in my head like drips in a bathtub, trickling until the tub overflows. When I express these thoughts, the plug is lifted for a few seconds and I no longer feel overwhelmed.

When I hit general anxiety overflow, my family and friends usually help me to express myself, and I feel better. When it comes to eco-anxiety, however, my experience is often different. You might recognise some of the responses I have received:

These responses do not help me. I don’t want to calm down. I don’t want to be numb to the climate crisis, or learn to put it in a box. What I want is to do something about it. I had four sessions with a therapist, who told me that my eco-anxiety is rational. I knew that already. 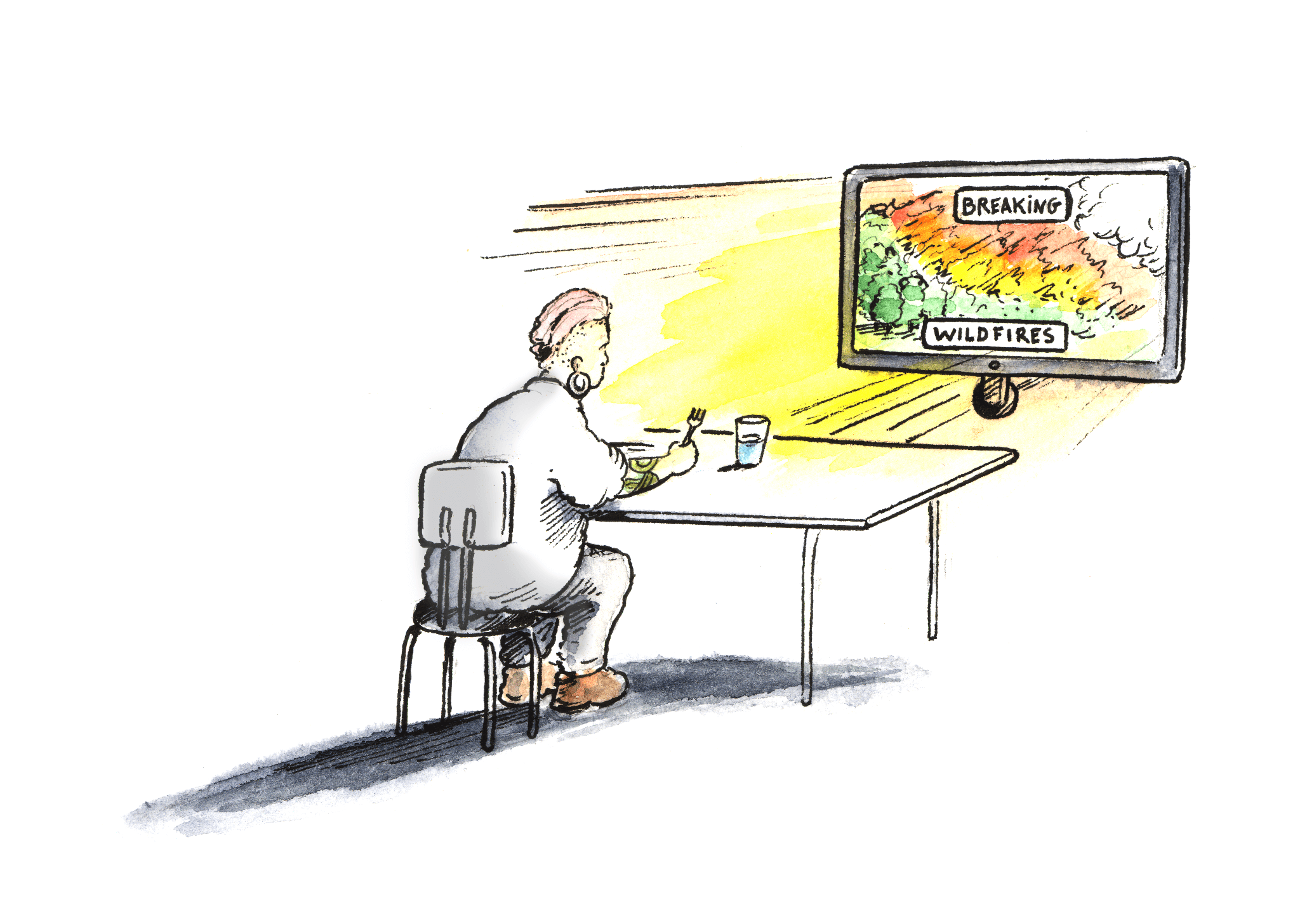 I feel adrift and alienated in my feelings for an issue that does not warrant alienation.

I began to wonder: how many other people feel this way? There must be loads of us.

I first realised I was indeed not alone while watching a debate regarding the Insulate Britain protest group on Good Morning Britain, featuring journalist and environmentalist George Monbiot. The part that struck me was presenter Susanna Reid’s comments to Monbiot at around nine minutes in, a couple of minutes after he had teared up, as he described potential climate scenarios. Reid’s response?

"George, I’m sorry that you feel tearful about it. You obviously feel something that is not getting across to that majority of people."

So, as Monbiot is having a rational reaction to the widely verified fact that humanity is knowingly creating the end of our civilization, the presenter is simply sorry that he’s crying about it. Bingo! That’s how I feel: alienated. 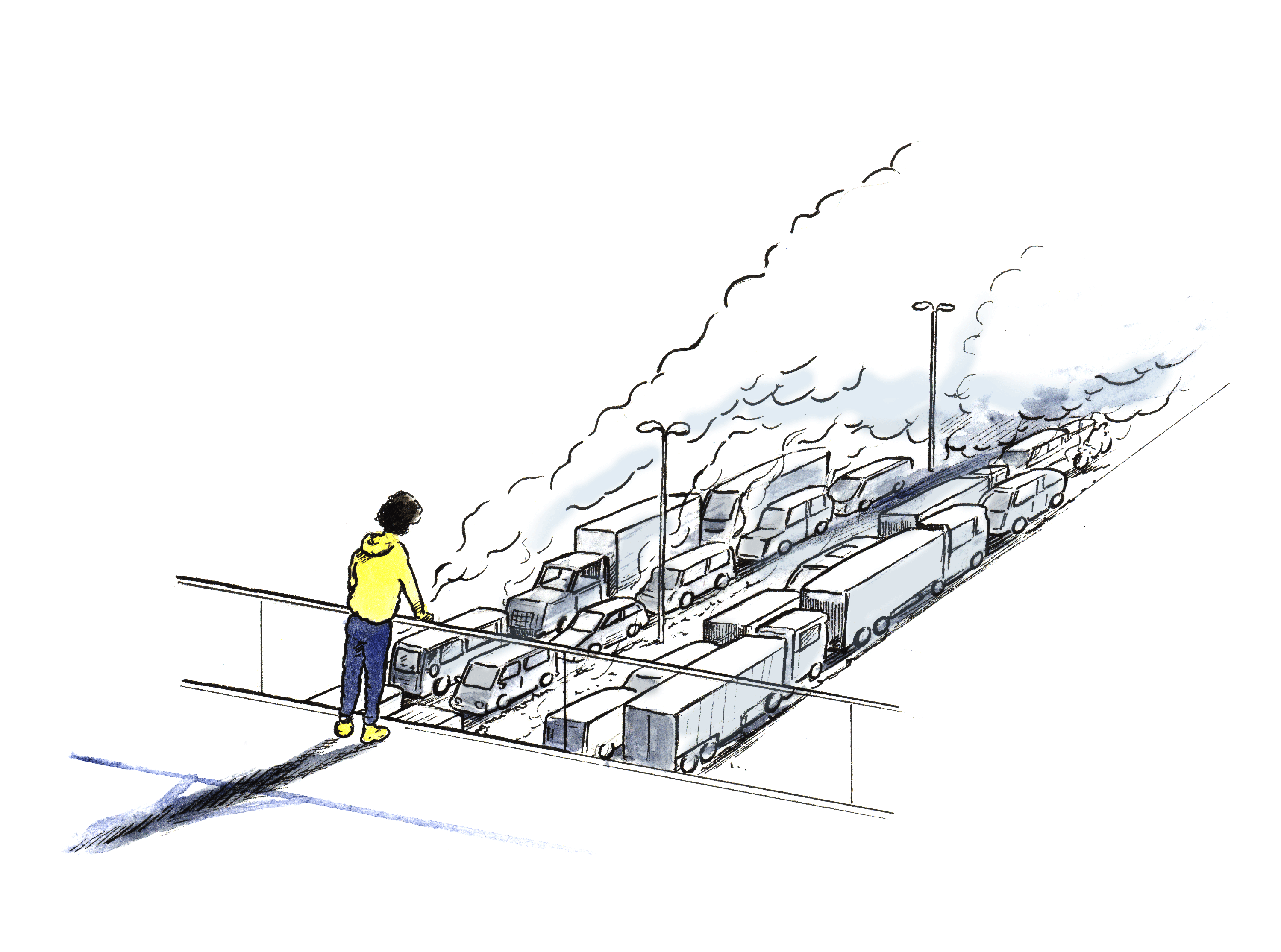 This article is not about who is right and who is wrong. There are more than enough polarizing thought pieces on the internet already, and I refuse to add fuel to that smouldering heap. Rather, it’s about how to appreciate and handle feelings of alienation that may arise when you need to express eco-anxiety.

I contacted the Climate Psychology Alliance (CPA) for help. This alliance brings together psychologists who are engaging with the climate crisis, including Linda Aspey. A coach, facilitator, therapist, and speaker, Aspey told me that I’m not alone in feeling alienated. 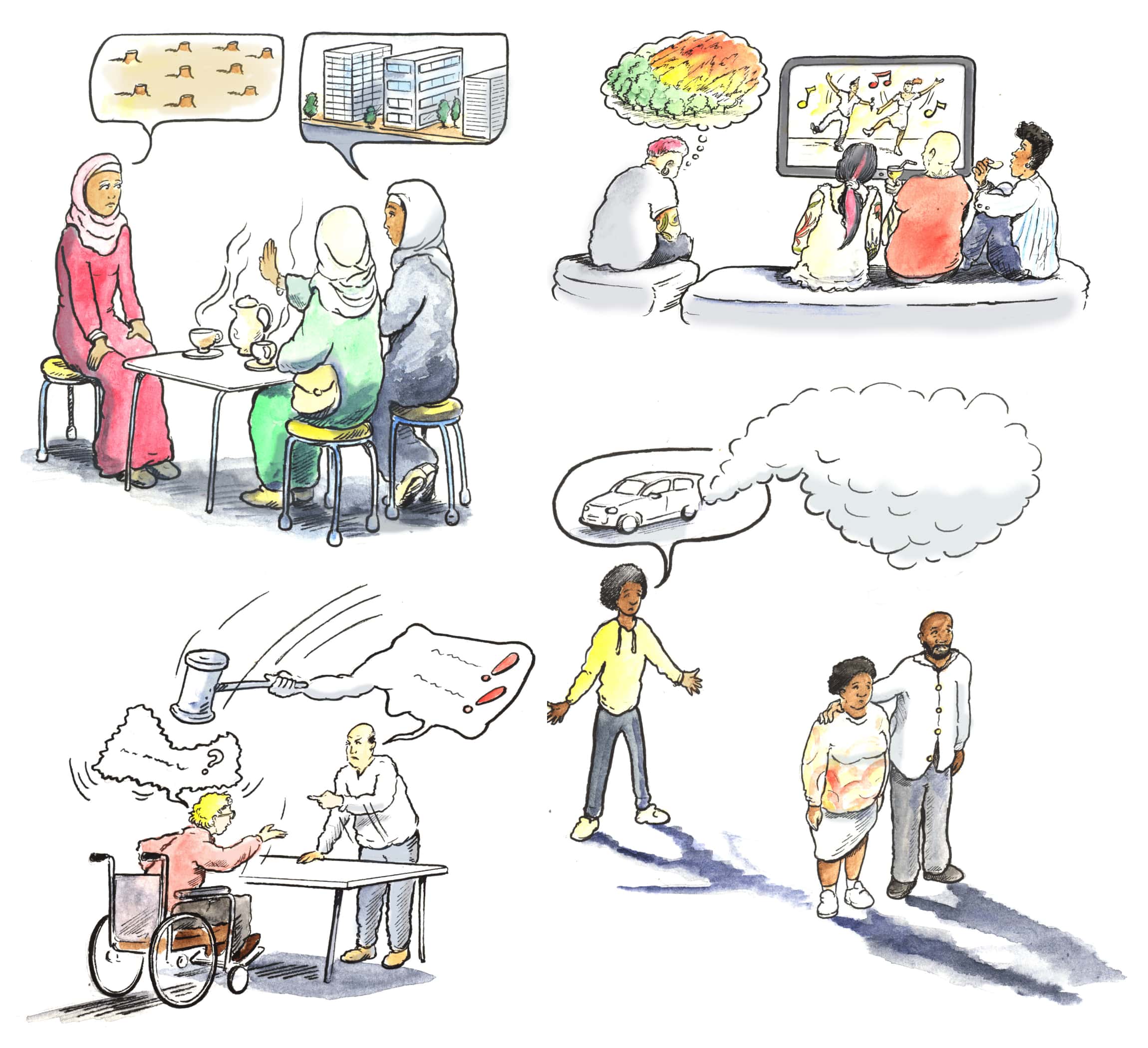 Aspey described a scene that will be familiar to many of us: watching footage of people starving to death in a famine-hit country on the 6 o’clock news while eating dinner in a safe and comfortable home. Aspey rightly points out that, in order for humans to be able to function on a daily basis, we have developed all sorts of coping processes for such scenarios — processes that can be applied to the climate and ecological crisis, as well. They include:

The distance could be literal or metaphorical, but by establishing it, we make ourselves feel safe.

For example: “Rising sea levels aren’t going to impact us, because we don’t live near the ocean.”

By initiating a debate, intellectualisation drains a topic of any emotion, and therefore suppresses anxiety.

For example: “The World Bank was given X billions of pounds last year to tackle climate change, so why aren’t they doing something about it?”

Pushing the problem into the laps of others, which is an unconscious admission of feeling powerless and inadequate.

For example: “As long as China continues pumping out coal, there’s no point in us doing anything.”

Simultaneously knowing and not knowing something — what the 1984 author George Orwell called ‘doublethink’.

For example: You watch a news story about the need for urgent climate action, but it is immediately followed by a story that celebrates economic growth.

Another person I contacted via the Climate Psychology Alliance was Dr. Gareth Morgan, who also talked about disavowal. A clinical psychologist and University of Leicester lecturer, Dr. Morgan says our widespread practice of disavowal means that:

“The messages people are getting from society are contradictory, and it has the effect of people not staying with the threat [of the climate and ecological crisis] for long.”

Dr. Morgan categorises the four processes listed above as threat responses. For instance, when I try to talk about the climate and ecological crisis with my friends and family, I am reminding them of an enormous threat. For some, it is the first time that the true extent of this threat has been described to them. In turn, they deploy a threat response.

A Question of Power 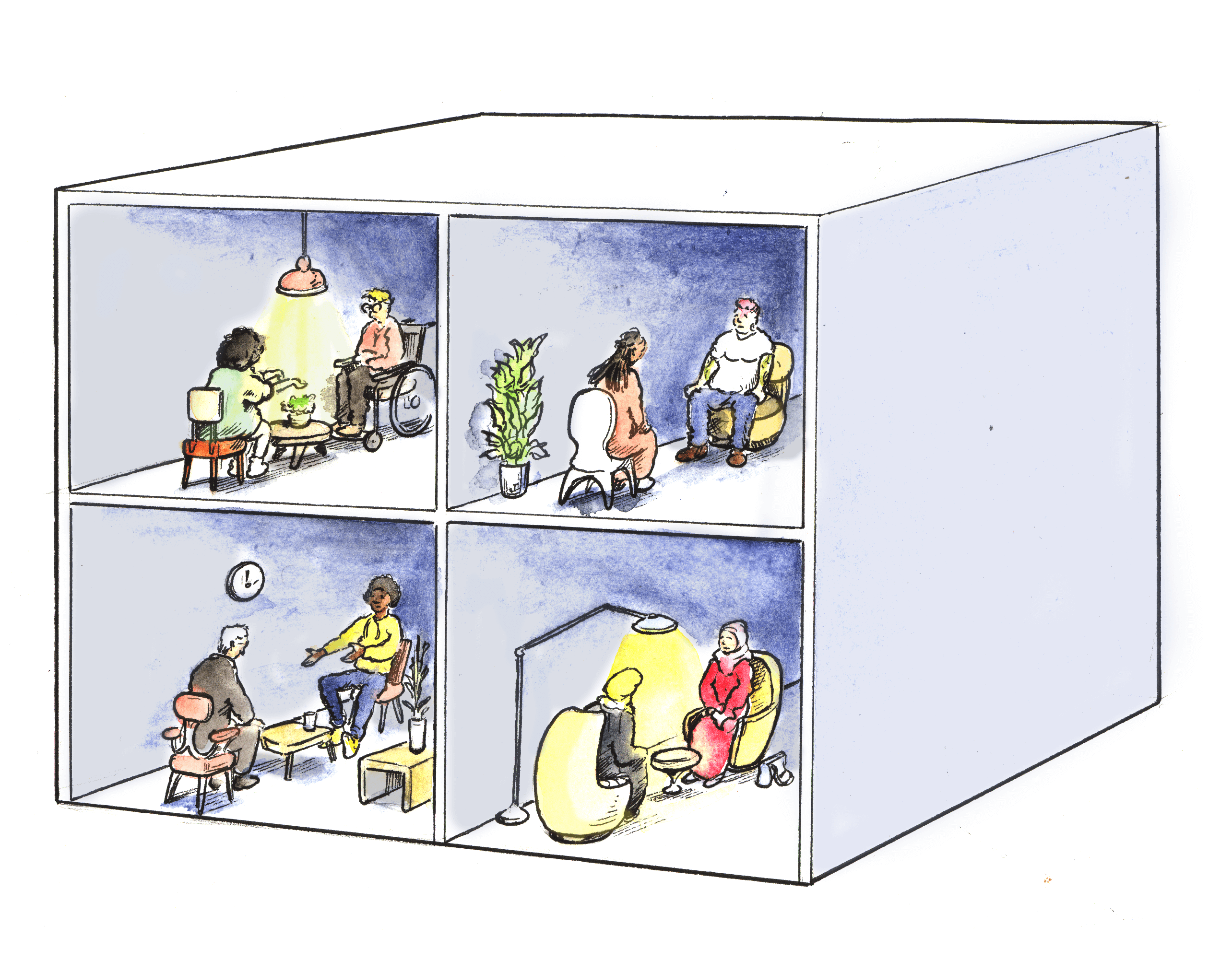 A common threat response I have received is deflection: “You should talk to a psychologist or counsellor about your climate crisis anxiety.”

I am definitely not the only one, because Dr. Morgan has contributed to a new theoretical paper that explores this phenomenon. Titled The Power Threat Meaning Framework and the Climate and Ecological Crises, the paper argues that turning eco-anxiety into an individual’s problem is a logical response from a capitalist’s perspective. As Dr. Morgan argues:

"What we don’t need is more one-to-one therapy, or more pathologizing of individuals. What we do need [are] more opportunities to bring people together, and more collective action. We need those in positions of power to act and use their power." 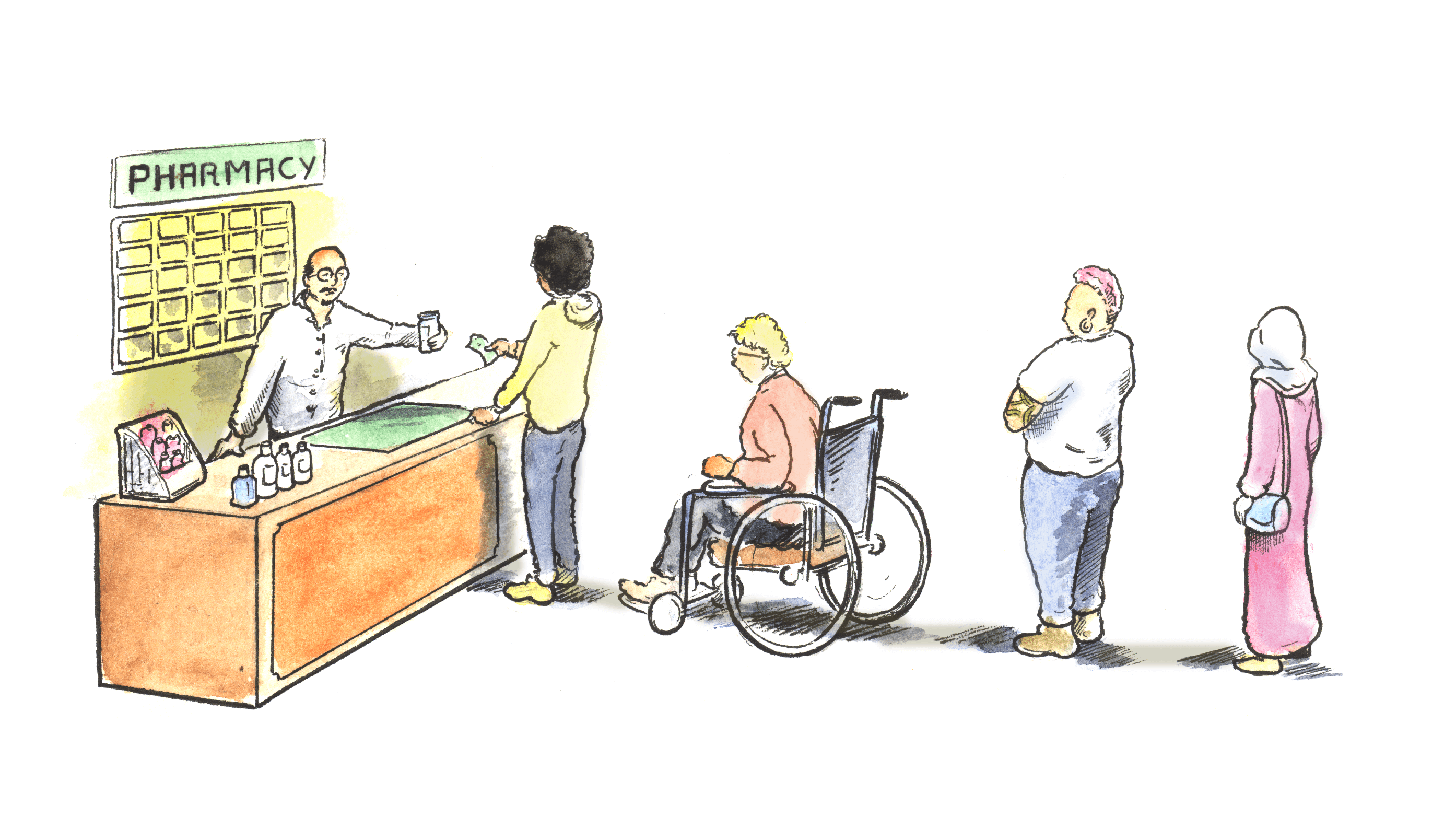 Individualising my distress paves the way for psychiatric or psychological ‘treatments’ for my reaction to the climate crisis – a crisis that capitalism is perpetuating. Capitalism necessitates individualisation so that we continue consuming. If my anxiety regarding the climate and ecological crisis is regarded as a problem within me, an individual, I can be sold solutions. I can therefore be ‘treated’ for my mental health problems rather than changing the systems that have created the climate and ecological crisis, and my anxiety. This leaves everyday business free to carry on as normal.

My loved ones are not to blame. Rather, those who attempt to individualise my eco-anxiety are simply offering what seems to be an obvious solution to many who’ve been raised in a society that values the individual over the community. 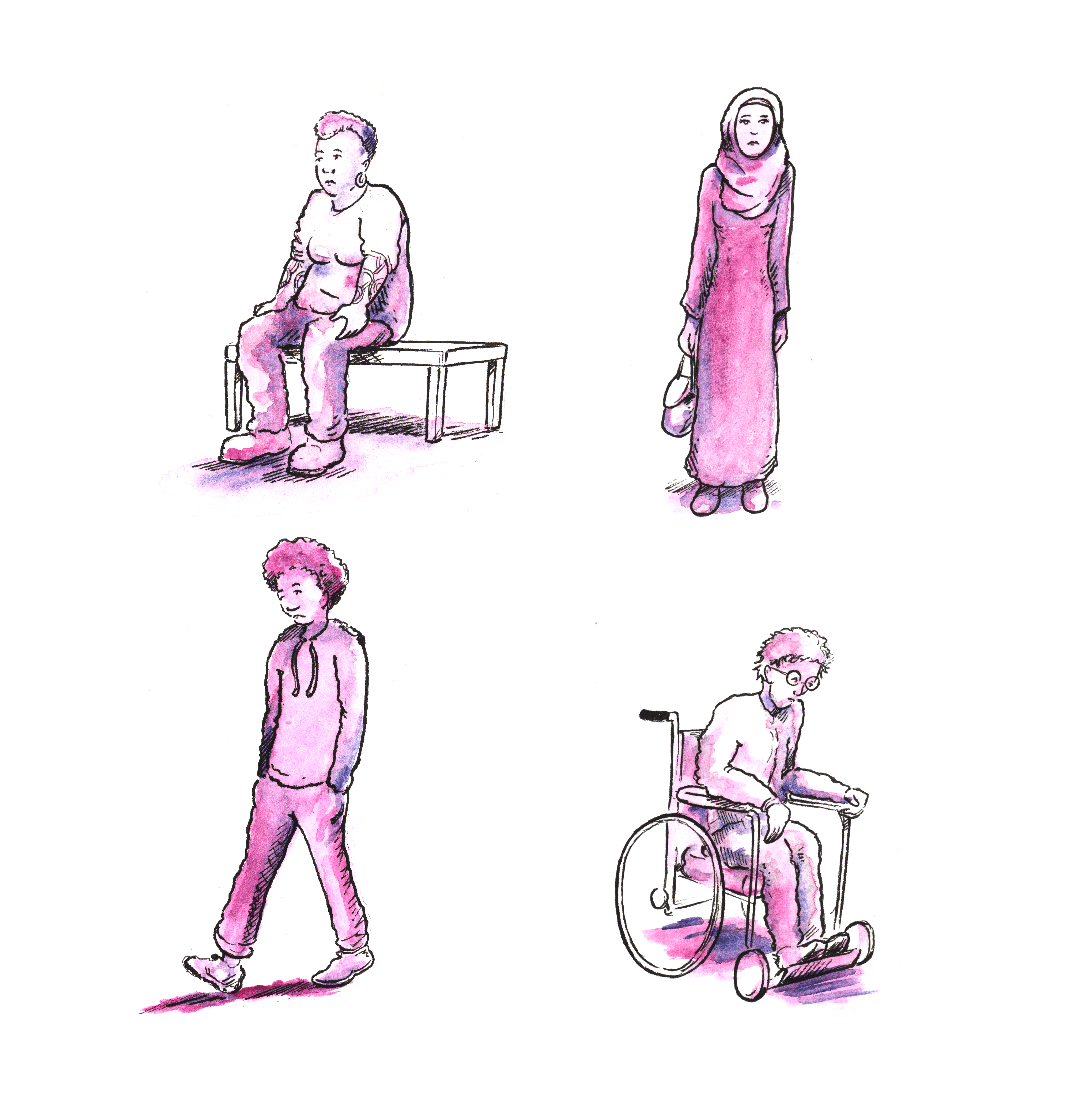 "Tell me about despair, yours, and I will tell you mine."

Aspey told me that we all deserve and require emotional support from our loved ones — it’s how we’ve evolved as a species. This sentiment echoes what Dr. Morgan says above, and is one of XR’s core tenets: We’ll only get through this crisis as a collective. Indeed, it’s why XR demands citizens’ assemblies.

If members of your personal collective aren’t willing to confront the enormous threat that the climate crisis represents, it is crucial that you find like-minded communities. If you don’t, you might follow in my footsteps and find out the hard way that you can’t cope. 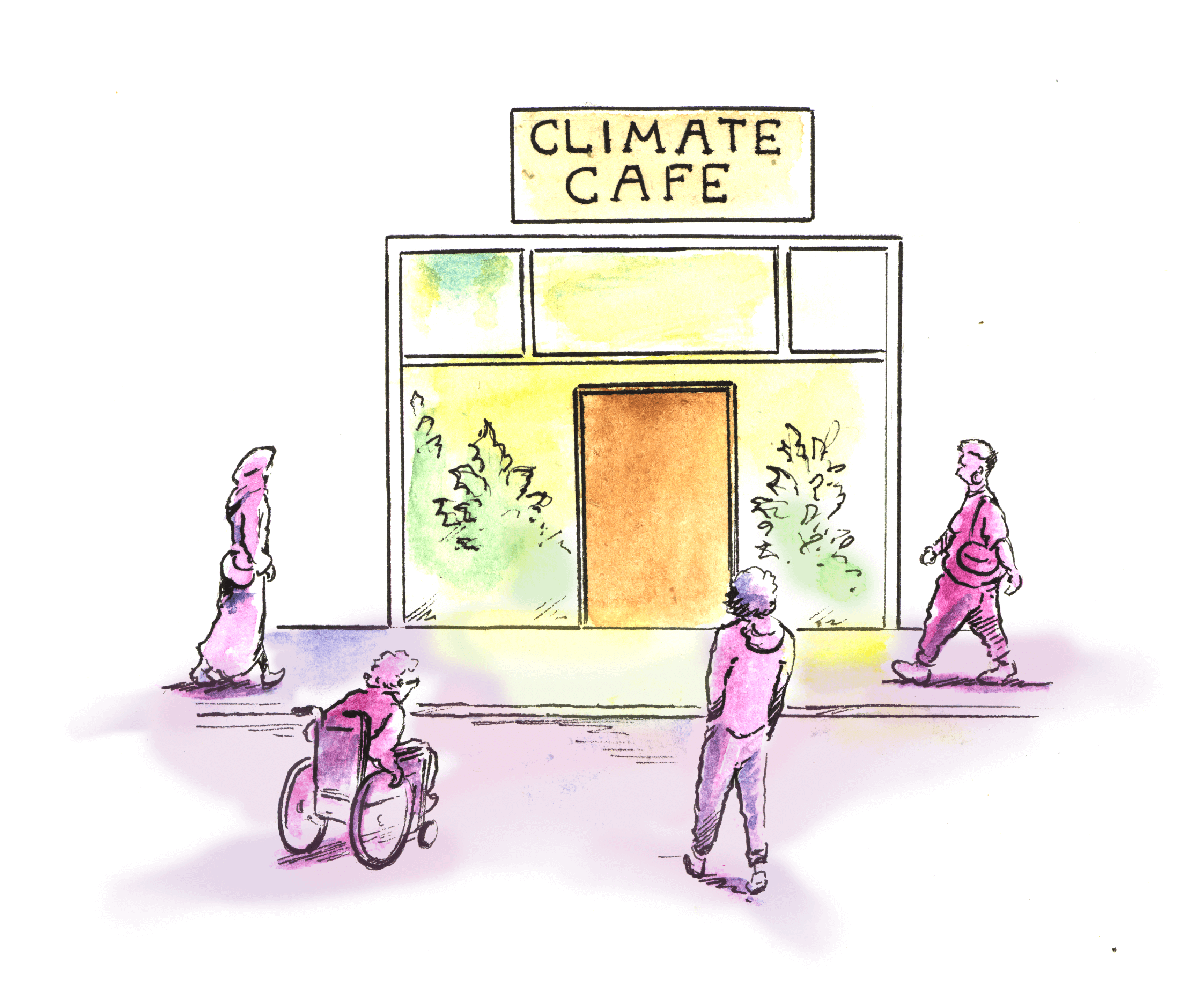 The CPA offers a few ways to find such communities. It champions Climate Cafés, which you might have heard about. Available across the UK in-person (and anywhere online), you can sit down with a drink and openly express with others how you feel about the climate and ecological crisis. Search online for digital and in-person Climate Cafés near you. You’ll find lots of organisations that run these get-togethers. The CPA also offers training for people looking to set up a Climate Café. Or, try a free course of three one-hour sessions with a CPA counsellor who acknowledges the climate crisis; I found this programme extremely cathartic.

Another initiative is The Work That Reconnects. The teachings of Joanna Macy lie at the heart of this network, which emerged in the late 1970s. Macy is a scholar of Buddhism, general systems theory, and deep ecology, who teaches that we must first re-establish our place in the natural world before going forth into action. A network of facilitators run The Work That Reconnects workshops online and in-person; Linda Aspey is currently supporting one such workshop programme for Just Stop Oil activists. 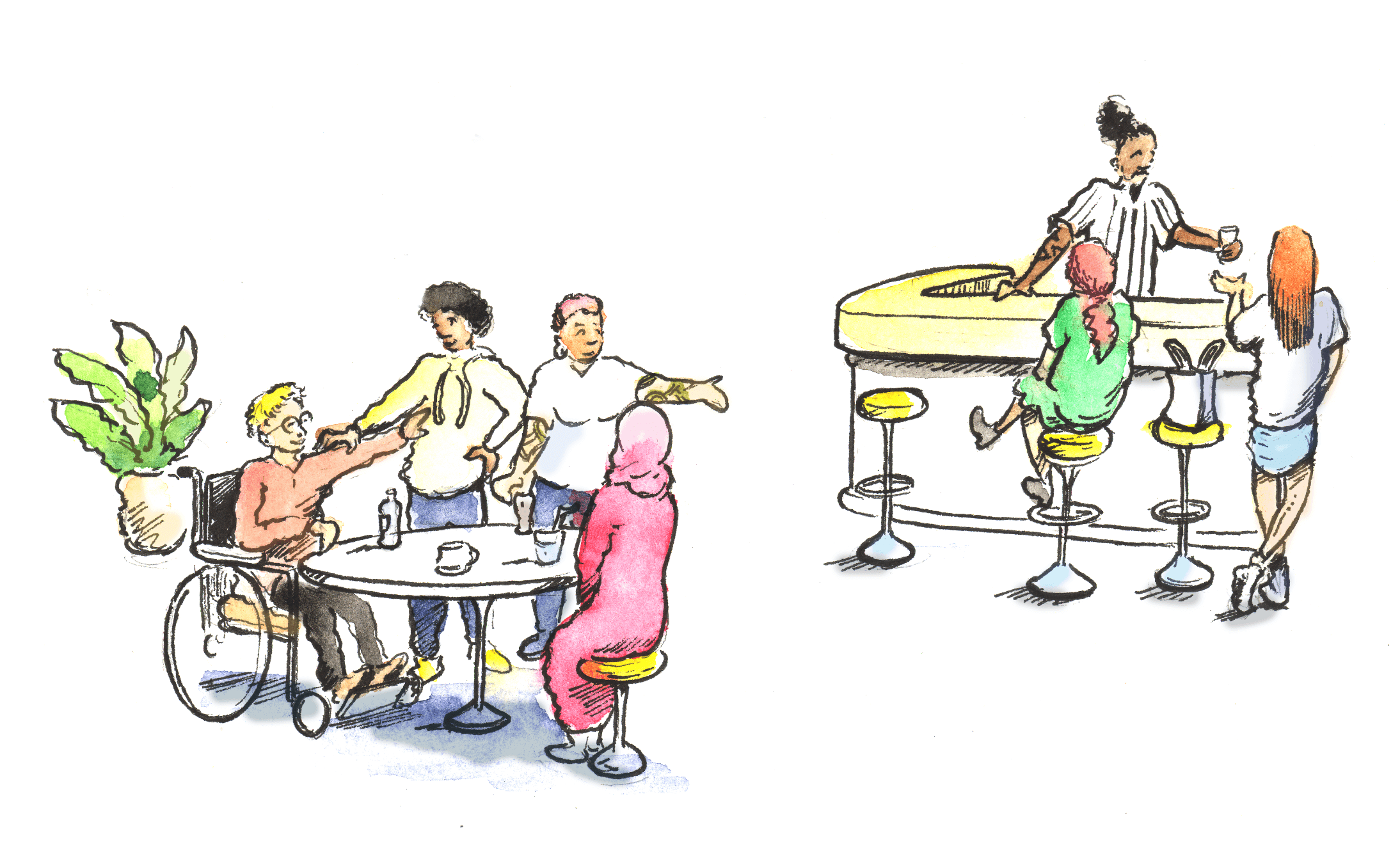 When any of us find like-minded communities that make us feel understood and safe, it’s tempting to lose sight of everybody else. Being tribal might sound quite fun, and the security of belonging is alluring, but don’t forget how polarised our societies already are: vaxxers vs. anti-vaxxers; QAnon vs. ANTIFA; alt-right vs. communists. Whatever your personal take on these perceived binaries, polarisation makes us increasingly incapable of cooperation, tolerance, and mutual respect.

We won’t survive this crisis if we divide into warring tribes. In Katharine Hayhoe’s book Saving Us, Canada’s most famous Christian climate scientist writes:

Try not to pull away from those you love, despite how they make you feel when you talk about the climate and ecological crisis. Believe me, I know this is not easy. Here are some thoughts or ideas you might find useful in re-framing your communication patterns with loved ones: 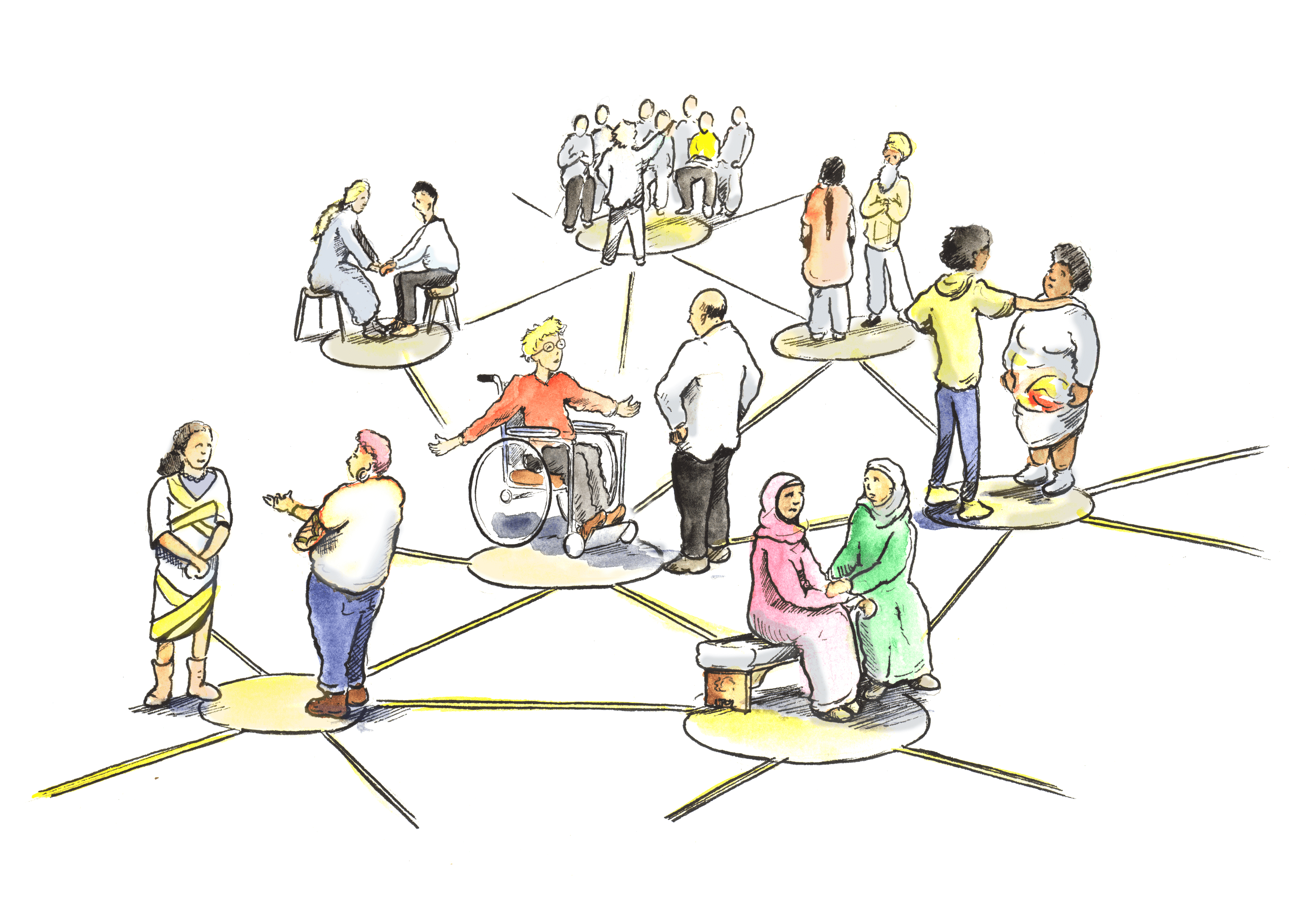 Talking about the climate and ecological crisis with your loved ones is a valuable form of climate action. It is difficult to disrupt social harmony and tempting to sink into antipathy, but, as Joanna Macy says, “Of all the dangers we face, from climate change to nuclear wars, none is so great as the deadening of our response.” Just don’t forget that, alongside action, we also need help, support, and love in these difficult times.

Neil writes about the climate crisis for Extinction Rebellion and Bank.Green, among others. Browse a selection of his work and get in touch here.

*All original illustrations in this article were painted in watercolour for XR Global by Dustin Jacobus, who also provided brilliant artwork for XR Wordsmith's Solarpunk Storytelling Showcase. You can see more of his work on his Instagram here.*